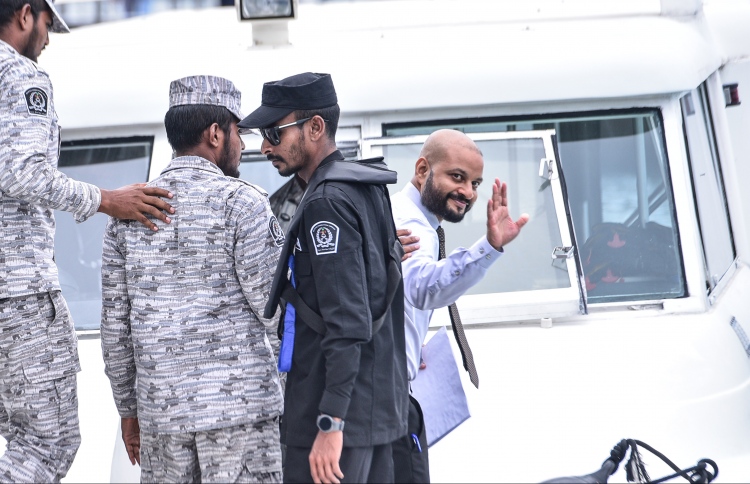 Dhiggaru MP Faris Maumoon waves as he is escorted to jail. PHOTO/MIHAARU

The High Court has decided to put the remand appeal of Dhiggaru MP Faris Maumoon on hold until the Supreme Court reaches a decision regarding the abrupt change to the Judges Bench presiding over his case.

The son of former President Maumoon Abdul Gayoom, MP Faris is charged with offering bribes to lawmakers to garner support for the opposition lobbied censure motion against the parliament speaker. After the Criminal Court ruled to remand him until the end of his bribery trial, the opposition lawmaker appealed the verdict at the High Court. However, the appellate court had switched out Judge Ali Sameer for Judge Shujau Usman on the bench after concluding MP Faris’ appeal hearings.

Subsequently, MP Faris’ legal team had filed at the Supreme Court to overturn the shuffle in the High Court judges’ bench, referring to an apex court ruling in 2012 which states that no changes may be made to the bench in the middle of a trial without plausible judicial or legal reason.

During the pre-verdict hearing held Thursday at the High Court, Faris’ lawyers again noted that the new bench presiding over the case violates the Supreme Court’s 2012 verdict. They also declared that the matter has been brought to the attention of the top court.

Taking the defence’s point into consideration, the judges then decided to put MP Faris’ appeal on hold until the Supreme Court reaches a decision regarding the change to the High Court bench.

With the exception of Judge Shujau Usman, the panel hearing Faris’ case remains the same with Chief Judge of the High Court Abdulla Didi and Judge Abdul Rauf Didi.