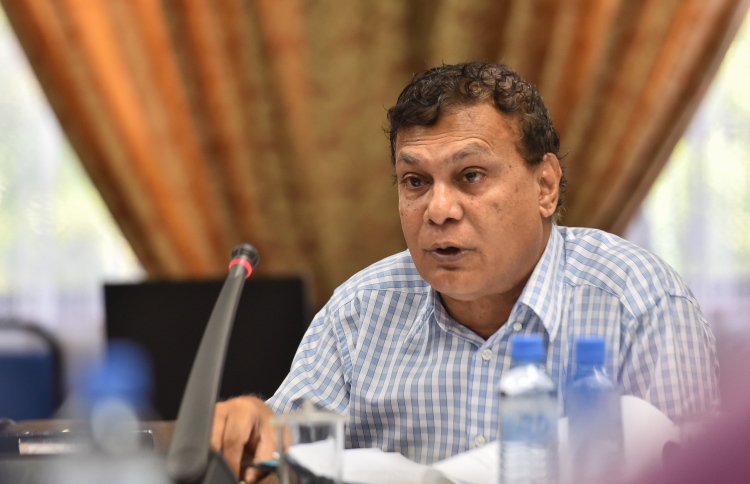 Opposition lawmakers boycotted the parliamentary budget review committee’s meeting on Monday after their allocated debate times were curtailed by parliamentarians of the ruling party.

The agenda for Monday’s meeting of the budget review committee was to debate on the counsel of Maldives Monetary Authority (MMA)’s governor and attorney general regarding the proposed state budget for next year.

However, Villufushi MP Riyaz Rasheed of PPM had proposed during the meeting to allocate only three minutes of debate time for each lawmaker present.

His proposal was backed by Madaveli MP Muaz Mohamed Rasheed of PPM and Hoarafushi MP Mohamed Ismail of MDA. Despite the support, committee chair and Villimale MP Ahmed Nihan did not call for a vote on the proposal.

However, Maradhoo MP Ibrahim Shareef of MDP had vehemently disagreed with MP Riyaz’s suggestion. He stated that each party must receive its originally allocated time, which should be divided amongst the members as that party sees fit.

“This infringes our rights. [MDP] has only three members present at the moment. If you gave three minutes each, we would receive only a total of nine minutes. We would lose the remaining eleven minutes; this won’t do,” he argued.

Seconding MP Shareef’s argument, Kaashidhoo MP Faisal Naseem of JP declared that debate times must be maintained according to the committee’s original decision.

“I know perfectly well what Riyaz Rasheed is seeking to do: he wants to take over the time previously given to us because only a few members of [opposition] parties are here,” he accused.

MP Shareef went on to say that the ruling coalition holding the majority of the budget review committee should not allow the rights of the minority to be violated. He repeatedly requested the committee to return to the originally agreed debate times However, PPM members objected to his demand, upon which Shareef declared that MDP will not remain in the meeting unless the party receives its allocated time.

MP Riyaz had replied that the committee will not compromise its policy regardless of whether the opposition lawmakers stay or leave. Shareef responded to his remark with harsh criticism and walked out of the meeting, followed by the rest of the opposition MPs.

The remainder of the budget review committee meeting was conducted only by members of the ruling coalition.