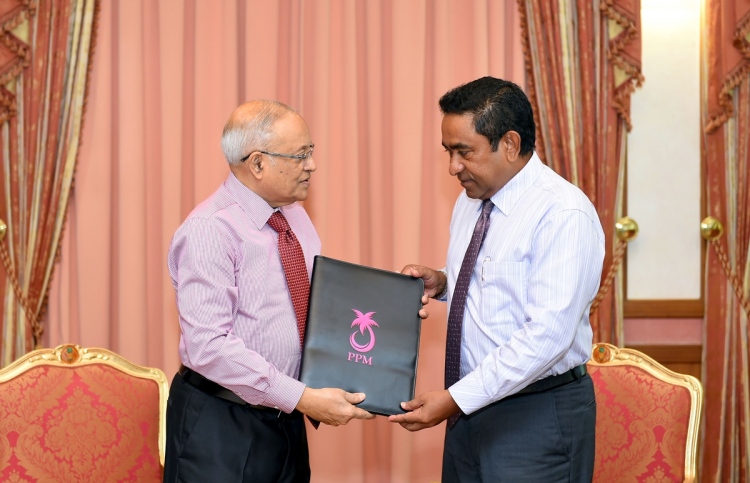 Mohamed Hussain Shareef, the newly appointed Ambassador of the Maldives to Sri Lanka, declared that he has lost all respect for the former president, Maumoon Abdul Gayoom, because of the latter’s actions.

In an interview to Mihaaru on Sunday, Shareef, who had been in the former president’s service for several years, explained that he lost respect after witnessing Maumoon’s hypocritical actions in contrast to his promises.

Claiming that he himself wrote the charter of ruling Progressive Party of Maldives (PPM), of which Maumoon had been the leader before he was unceremoniously ousted after a political fall-out with his half-brother and PPM’s advisor, President Abdulla Yameen Abdul Gayoom, Shareef declared that Maumoon had been adamant about certain sections and subjects to be included in the charter. 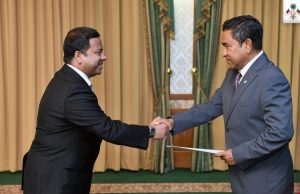 “But after he decided to operate our party [PPM] in the same we managed the previous party that failed, it became very difficult for me to maintain my respect for him,” said Shareef, referring to the Dhivehi Rayyithunge Party (DRP).

DRP was originally founded by former President Maumoon. He later left the party due to political differences and divisions that arose within DRP, and formed PPM.

The ambassador further declared that certain “undue words” Maumoon had personally hurled at Shareef were another factor that stripped the former president of his respect.

“I don’t believe the words Maumoon said to me were justifiable; all my services to him were above that … I’d served him on a professional level for a very long term, with many services. None of those were for a price,” he said.

He highlighted that he was the first to resign from a government post and follow the former president after Maumoon lost the Presidential Elections 2008 to former President Mohamed Nasheed. He added that he had then worked at an office of Maumoon’s choosing, and not for a particularly heft remuneration.

The only former president who still holds his respect, Shareef stated, is Mohamed Waheed, who took the de facto position after the fall of former President Mohamed Nasheed’s government. Shareef added that while his position as an ambassador demands his respect for figures that dutifully stay in line with the laws and regulations of the Maldives, former President Nasheed does not have his respect, either. He asserted that the sentiment will not change in the future. 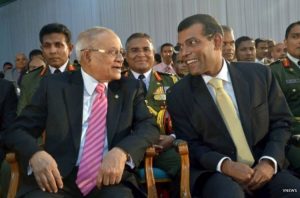 Voicing his opinion on the political fall-out between former President Maumoon and incumbent President Yameen, he declared that he is one of the people most knowledgeable of the relationship between the two Gayooms. Shareef stressed that he does not believe that there should be room for political differences between the two half-brothers with regards to PPM and the government.

However, he said that Maumoon had continued to interfere with President Yameen’s administration.

“And that outlook is wrong. If it’s Nasheed, he is within his rights to criticize the government as the leader of the opposition. But that same president [Maumoon] had released statements praising the [Male-Hulhule] bridge and other projects undertaken by this government. I’m the one who penned those statements; and he tells the person who wrote those statements that [President Yameen] is unfit for a second term. How ridiculous is that,” said Shareef.

“[Former President Maumoon believes] that the charter [of PPM] has to be in line with his every want and whim, whether it is possible or not. All the electoral procedures also has to be according to his desires. But as the one who wrote the charter, I cannot accept that.”

Moreover, Shareef claimed that former President Maumoon had not held regular meetings of PPM’s council during his tenure as the party’s leader. However, the current PPM, which is under President Yameen’s leadership, is functioning efficiently and well, he said.