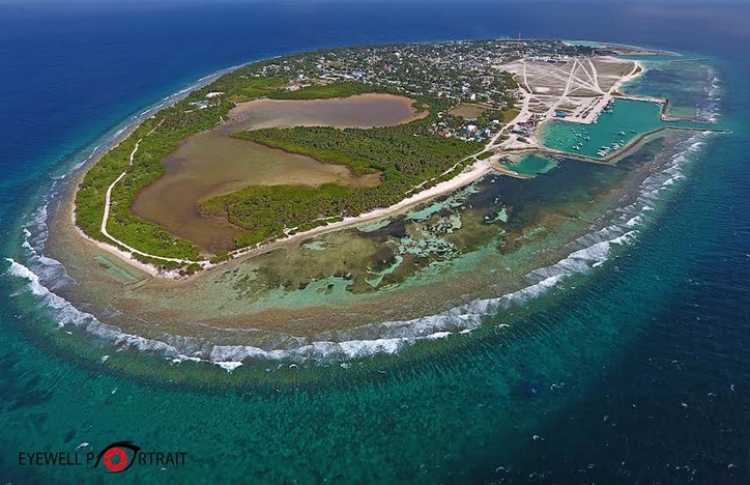 Aerial view of HDh. Kulhudhuffushi, which shows the large mangrove swamp of the island. PHOTO/EYEWELL PORTRAIT

The government’s revelation that the mangrove swamp of Haa Dhaal atoll Kulhudhuffushi island will be reclaimed for the development of a domestic airport has sparked outcry from the island’s residents.

While the government plans to commence development of Kulhudhuffushi Airport within this year, the Environmental Protection Agency (EPA) has already conducted an Environment Impact Assessment (EIA) on reclaiming the island’s large mangrove area (locally known as kulhi).

The main concern of most residents is that the island would lose a natural heritage that is inextricably linked to Kulhudhuffushi’s protection.

Kulhudhuffushi’s mangrove swamp is notable for having the most number of mangrove species in the Maldives, most of which are endangered. The swamp is also one of the largest in the north of the country.

The environment protection NGO, ECOCARE Maldives, stated that the large swamp provides significant protection to the island from natural disasters such as tsunamis. Noting that the mangrove swamp also collects and drains rainwater after heavy showers, ECOCARE declared that destroying the swamp compromises the safety of Kulhudhuffushi.

Maeed Zahir of ECOCARE suggested that Kulhudhuffushi could bring in revenue via ecotourism at the wetlands instead of building an airport. Zahir also highlighted that the mangrove area provides raw materials for the livelihoods of island residents, such as coir weaving.

Another concern for Kulhudhuffushi’s residents is that the island of Hanimaadhoo, which is only 20 minutes away from Kulhudhuffushi in the same atoll, already has an international airport.

“While the government says that this island will be developed as a northern trade hub, we have to consider that there is an international airport nearby. How many flights would land here? How many jobs would be created here?” demanded a resident.

“With an airport already close by, we don’t want to destroy such a historically significant heritage.”

Meanwhile, EPA has yet to release the results of its EIA report on reclaiming the mangrove swamp. However, Maldives Transport and Contracting Company (MTCC) has already announced that its newly acquired dredger, Maha Jarraf, will be first deployed to reclaim the airport area of Kulhudhuffushi.

The government must also provide a month for the public to submit their opinions before the EIA is finalized.

Regarding the troubling issue, Kulhudhuffushi Island Council stated that it wants an airport, but not at the expense of the island’s mangrove swamp.

The delay in developing the Kulhudhuffushi Airport had earlier sparked criticism from opposition parties. However, the government had continually guaranteed that the airport would be made into a reality. Despite the assurance, there has been public criticism with several people claiming that the project is a politically motivated message to the people.