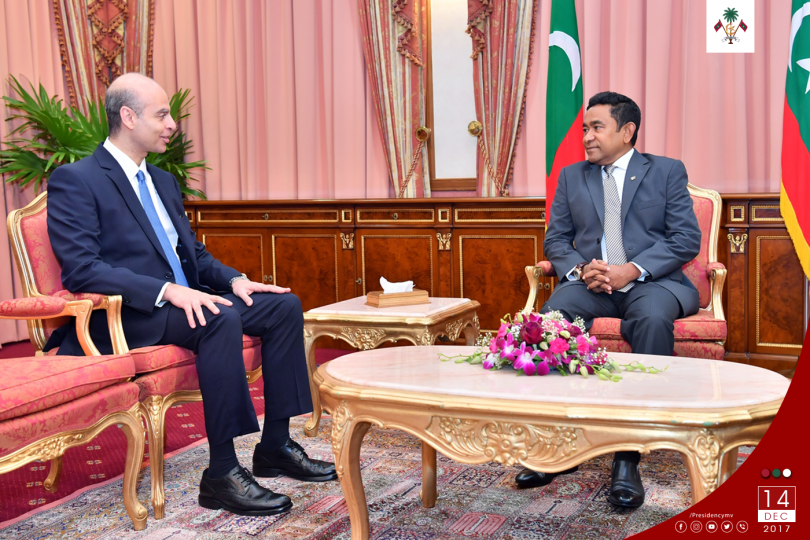 The new Non-Resident Ambassador of the Arab Republic of Egypt to the Republic of Maldives, H.E. Hussein EL Saharty presented his credentials to President Abdulla Yameen Abdul Gayoom‎, this morning, at the President’s Office.‎

Speaking of the prominent role that Egypt has continued to play in the education sector in the Maldives, the President noted that a large number of students are currently completing their studies in Al-Azhar University in Egypt. The President highlighted that Maldives wishes to seek more scholarship opportunities for a growing number of Maldivian students who aspire to enroll in Al-Azhar University.

The President further requested the Ambassador for the support of Egypt for Maldives’ inaugural candidature to the United Nations Security Council as a non-permanent member, for the term 2019- 2020. In this connection, the President mentioned that every country should have an equal opportunity to serve in all organs of the United Nations, and that Maldives has been playing a significant role in attracting global attention to international issues, particularly the consequences of global warming and sea level rising.

In closing, the President expressed hope and confidence that the fraternal relations between the Maldives and Egypt will continue to flourish in the years ahead.

The Ambassador conveyed good wishes from the President of Egypt, H.E. Abdel Fattah Al Sisi and Prime Minister, H.E. Sherif Ismail. He also conveyed assurances of his commitment to bolster the existing ties between Egypt and the Maldives during his ambassadorial tenure.