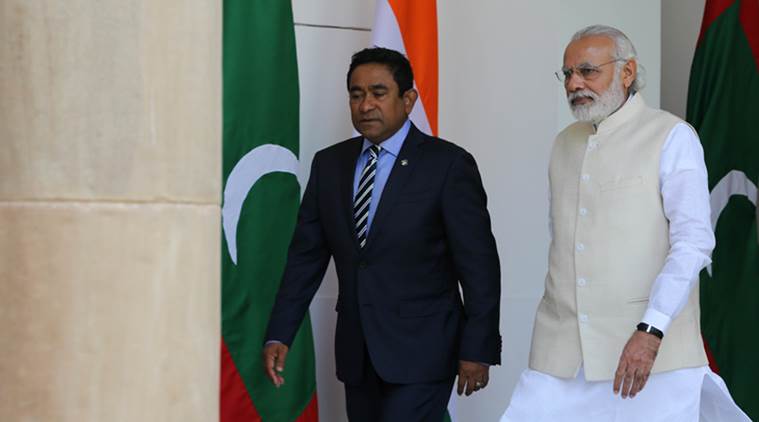 In a sudden move that has sent alarm bells ringing in New Delhi, Maldives rammed through its Free Trade Agreement with China in the Maldivian parliament last night in a session attended by only 30 out of 85 members.

The haste with which the government, led by President Abdulla Yameen, decided to pass the pact — the session took barely half an hour — is being perceived here as Male trying to cosy up to China.

This comes in the backdrop of Yameen planning to visit Beijing in December. This will be a reciprocal visit after the first-ever visit by Chinese president Xi Jinping to Maldives in September 2014.

Maldives is the only country in the neighbourhood which has not been visited by Prime Minister Narendra Modi in the last three-and-half years after he cancelled a proposed trip in March 2015 due to the turbulent political situation. Maldives and India do not have a Free Trade Agreement.

South Block sources told The Indian Express on Thursday that the Indian High Commission in Male has sent a report on the development which caught many in Delhi by surprise. This is Maldives’s first FTA with any country, and China’s second FTA with any country in South Asia — after Pakistan.

While there was no official response to the development, a source said: “We are examining the issue…and the ramifications of the FTA on our trade with Maldives.”

This development is similar to the events in July 2015 when Maldives passed an amendment to its constitution allowing foreign ownership of freehold land for the first time just a day after the legislation was tabled in parliament. The Indian Express had first reported about the development amid concerns that it could lead to increased Chinese military presence in the island nation.

While the text of the FTA between Maldives and China was concluded in September this year after two years of negotiations, there has been little debate and scrutiny of the pact in the island nation.

Sources said there had been no regular sitting scheduled for Wednesday but MPs were suddenly informed in the afternoon that an “emergency” session would take place. Several Opposition MPs alleged that they received text messages after the sitting began.

According to the Maldives Presidential office’s statement, the FTA will “enable exemption of duties on fisheries products exported to the world’s largest consumer market”. “Maldives transitioned from Least Developed Country (LDC) to Middle-Income Country status on 1st January 2011. However, this growth was accompanied with huge duties levied on fish products exported to the international market,” the statement said.

Interestingly, it said that the “Maldivian government has extended invitations to establish free trade agreements with countries including Japan, the United States of America, the United Kingdom and countries of the European Union”. However, it doesn’t name India.

Criticizing the FTA with China, former President and one of main Opposition leaders Mohamed Nasheed emphasized that such an agreement “will be detrimental to our economy as balance of trade is greatly in favour of China,” adding that the agreement “must be in the best interest of the people”.

The opposition, led by MDP, also said that the approval with just 30 votes in the 85-member house was not legally tenable.

“The MDP notes that the Attorney General of the Maldives had advised corresponding legislation for the Agreement to be legally binding. The Constitution requires 43 attending to pass legislation on this and the Government does not have the required votes. The FTA cannot be implemented until the legislation is passed,” Nasheed’s party said.

The MDP was pointing to Section 87(b) of the Maldives constitution, which states that “voting on any matter requiring compliance by citizens shall only be undertaken when more than half of the total membership of the People’s Majlis are present at the sitting at which the matter is voted upon”.