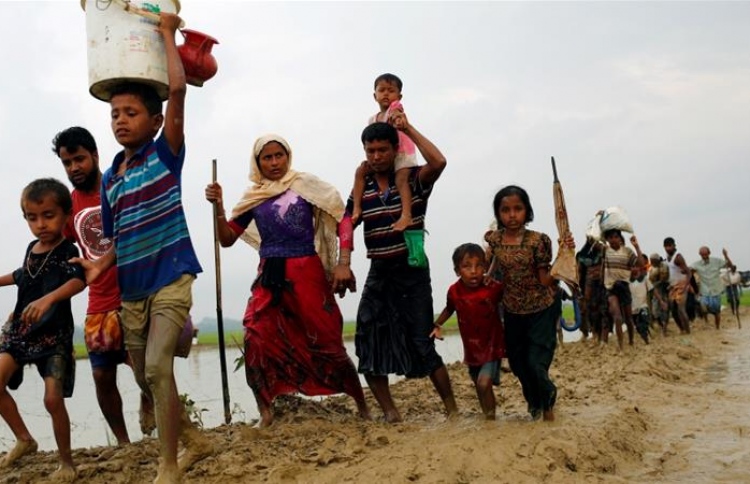 The original Dhivehi article was published on Mihaaru.com website on 7th September 2017.

When violence against Rohingya Muslims in Myanmar escalated, Maldives ceased trade relations with the country, reenacting the footsteps of the previous government where they cut ties with Israel. However, Maldives does not have much of a business relationship with Myanmar and Israel.

Ministry of Foreign Affairs of the Maldives explained that Maldives – Myanmar business ties were cut to push Burmese government to stop the ongoing violence in Myanmar. So it is clear it was a bid to pressure the country. However, the question is — will this action lead to an outcome?

Myanmar’s economy is mostly reliant on agriculture. In the past, Maldives did import staple food items such as rice from Myanmar. However, it is now imported from India or Thailand. The current items imported from Myanmar are like seafood and frozen fruits.

Looking at last year, only a minor trade was done between Maldives and Myanmar. Therefore, some believe that cutting a few million Rufiyaa valued trade, cannot be considered as a strict action against them. As the diplomatic relations between the countries still remains.

When the military and the monks launched a killing rampage against the Rohingya Muslims, diplomatic ties were not severed. So when Maldives abruptly cut ties with the long-standing diplomatic relations with Muslim nations like Iran and Qatar, people started questioning the foreign policy of the government. One itching question is: why is it more important to maintain diplomatic ties with Myanmar, instead of with Qatar, who had been providing enormous amounts of assistance throughout to the Maldives?

Diplomatic relations with Qatar was severed when Saudi Arabia and other Gulf states accused Qatar of supporting terrorism, and ultimately isolated it.

Last year diplomatic ties were cut off with Iran, citing by the government that peace and stability in the Gulf states are also linked to security and harmony in the Maldives. Even then, Maldives followed the footsteps led by Saudi Arabia.

For higher studies and for work, Maldivians travel to Qatar. Hamad Bin Khalifa Al Thani School (formerly known as Qatar Ameer School) in Laamu Atoll Gan Island, Masjid al-Sheikh Qasim bin Al-Thani mosque (named after the Sheikh Qasim bin Al-Thani) in Hulhumalé island and proposed plan to build world-class stadium in Hulhumalé before the end of 2022, are all sizeable generous project initiatives by the Emir of Qatar to the Maldives.

Violence against Rohingya Muslims is not just accusations. Those are atrocities confirmed by the international media, prominent countries around the world and by many international NGOs. While diplomatic relations between Qatar was severed due to a Saudi-led allegation, the question posed increasingly at the government is why weren’t similar action taken against Myanmar?

Foreign policy experts and some politicians claimed that diplomatic relations with Iran and Qatar were cut off to please Saudi Arabia and they continue to reiterate it even now.

Former President Maumoon Abdul Gayoom, who established diplomatic relations with many countries during his tenure, said it disrupts the freedom of the nation when Maldives severs ties with countries upon prompted to do so by others.

‘By following the lead of a single nation or by taking sides, I believe that it will disrupt the strength of the 100% Muslim nation. That is how other countries will see it,’ said Maumoon, in response to rumours that Maldives cut ties with Qatar due to Saudi Arabia’s
influence.

Must maintain an equal relationship

A senior official from an institution on Maldives national security‎ said, in order to prevent the influence of other countries over Maldives, the biggest measure should be to establish a harmonious and neutral relationship with all countries.

‘It is important to seek a balance within our foreign policy. To deliver equal opportunity to all nations. Thereby, making Maldives important for all,’ the official said.

By eliminating trade ties between Maldives and Myanmar there is no visible pressure or harm in it for them. However, by terminating all ties with Qatar, there are losses Maldives has to bear. Growing amount of criticisms are aimed at the government’s foreign policy when the country severed diplomatic relations with a Muslim nation that has provided numerous assistance in various forms to Maldives, without doing the same to a nation inflicting violent actions against Muslims.

Final voting tally of today's #UNGA decision to include #R2P & mass atrocity prevention on the formal agenda of #UNGA72. pic.twitter.com/KSK5fyjVSA

*Maldives did not vote in the vote taken on 15th September 2017 at the UN General Assembly in connection with item 134 of the draft agenda (The responsibility to protect and the prevention of genocide, war crimes, ethnic cleansing and crimes against humanity), the General Committee, by a recorded vote of 19 to 5, with 3 abstentions, decided to recommend its inclusion under heading I (Organizational, administrative and other matters).