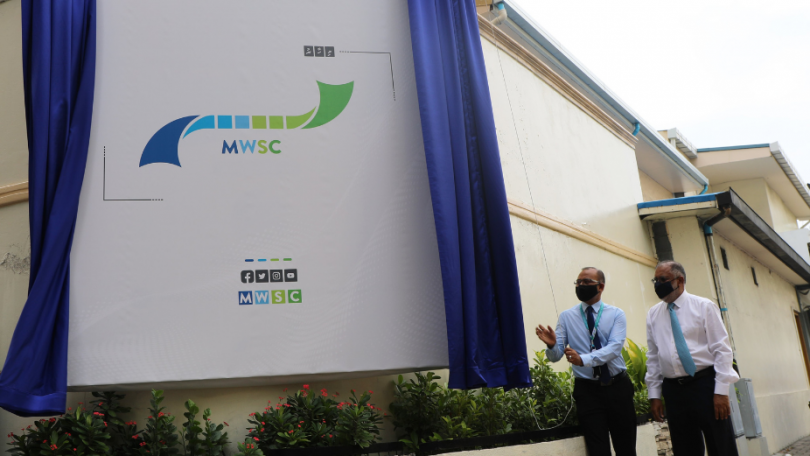 With their celebration of the 25th anniversary, Male’ Water & Sewerage Company (MWSC) makes changes to the company’s logo.

The company’s new logo was unveiled during a ceremony held at Fen Building yesterday, introduced to the public by Chairman Ahmed Mausoom and Managing Director Hasan Shaah.

Among the changes to the logo were the brightening of logo colour as well as changing the font of the company name. Director Shaah comments that the changes were made in a manner that doesn’t lose the essence of the original logo.

Shaah also states that the changes were made due to modern developments of MWSC.

“This company was incepted 25 years ago, to solve one of the biggest problems facing Male’ at the time, which was the lack of a water and sewerage network,” stated Director Shaah.

Shaah then details how after one year after the company was incepted, they had solved the issue by establishing and providing the network service to every home in Male’.

While the company was providing services to Male’ only at first, throughout the 25 years MWSC has expanded its services to Vilimale, Gulhifalhu, Maafushi, Dhuvaafaru, and Kulhudhuffushi. Establishing the water and sewerage systems to other islands as well are now underway.

MWSC divides 80 per cent of its shares to the Maldivian government and the other 20 per cent to Japan’s Hitachi company.