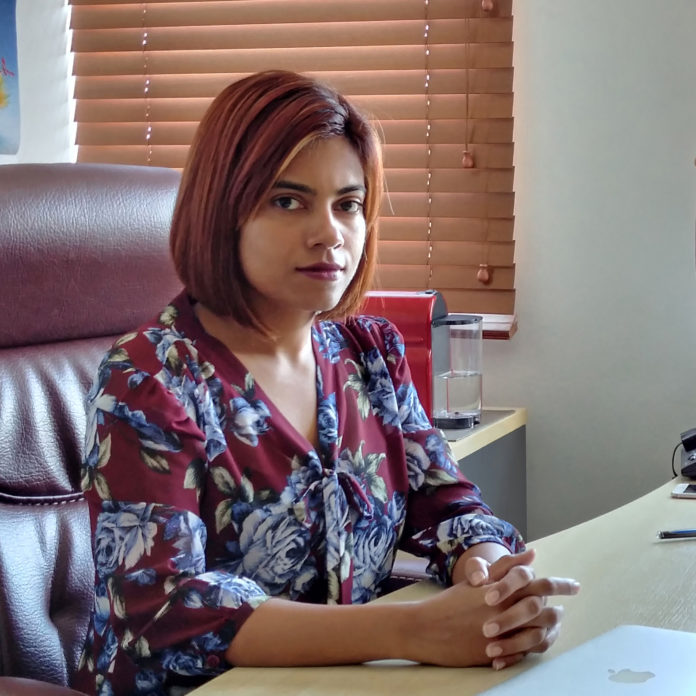 Ms Mariyam Visam is a dedicated young leader and advocator for development of women and small businesses in the Maldivian society. She acquired her Master’s Degree in Business Economics from University of Queensland, Australia and Bachelor’s Degree in Marketing Management from the University of Northumbria, UK. In January 2014, she was appointed to the post of Registrar of Companies (RoC). Prior to the appointment, she was serving as Director General of Capital Market Development Authority (CMDA). Following her appointment as RoC, she was also designated as a Board Member of CMDA. During her tenure at CMDA, she was also the Director-General for Pension Supervision and the CMDA representative on the Board of Maldives Pension Administration Office (MPAO). We had the pleasure of meeting this accomplished individual to learn more about her experience and journey through these professional positions.

How did you get started with your career?

I started my career with the Capital Market Development Authority (CMDA) right after graduating in Marketing Management.  I thought I should use what I had learned in marketing management in such a way that I could make a difference rather than doing just product marketing. I chose CMDA because stock markets are something that has always interested me. Initially at CMDA, after dealing with corporate affairs as a Deputy Manager in the corporate affairs division, I realised that it just wasn’t for me. I spoke with our CEO back then, Ms Shafeega, and she assigned some work relating to investor education, which included travelling to islands and promoting the need for savings and investments. At some point, I was looking after the entire stock market operations as well. Since all of my work required me to do research, it was fascinating and every day was a new learning experience. A lot of work that I did with CMDA in initial years were in relation to corporatizing the stock market by forming the Maldives Stock Exchange and Maldives Securities Depository.

After finishing my Masters in 2009, I worked mainly on establishing a pension system and training staff on risk-based supervision. Then in 2012, I was appointed as the Acting Deputy CEO. As the Deputy CEO, my main task was to ensure that the key strategic projects within the CMDA took shape. That was a huge task and something I am very proud of, I would say. Along with that, I did a lot of work in terms of managing international relations and I was also appointed as the Representative from Maldives to the International Association of Pension Supervisors.

After spending 7 years with CMDA, on 28 January 2014, I was appointed as the Registrar of Companies and I have been here since then.

What are the biggest challenges you have faced?

While I was fortunate to be part of something very big, which was the Pension Supervision Department within the CMDA, it was a huge task and a challenge. Because this is the point in time where Maldivians did not really believe that a defined contributory system like the pension system would be something sustainable in this country and nobody really bought into the idea that defined contributory pension system is something that people should actually sign up for.

Another challenge was training staff in Risk-Based Supervision. As it was something very new to Maldives at the time, it was extremely challenging. Risk-Based Supervision means we have to develop a risk matrix based on the institution that we supervise and we have to assess the risks and identify key areas of risk that we have to focus on. In addition, we have to provide the recommendation to the institution in terms of its governance aspects, in terms of their investments, in terms of their resources. So this is a huge task.

When I got out of CMDA and came here, it struck me that there was so much more to do in the private sector. I have been working constantly on making the business environment in Maldives better. When I say that, it may sound very easy but we have to understand that making or putting in place policies, strategies, or systems, which continuously improve business frameworks, is a formidable challenge.

What do you consider as your most significant achievements?

I actually played an instrumental role in respect to developing the regulatory regime for supervising the institution. I also believe that one of the key things that we did back in CMDA as part of the Pension Supervision Department includes licensing custodians. The Pension Act required the CMDA to direct the report to the president on the operation of Maldives pension administration offices as well as the member’s performance. It was a huge task, but we managed to initiate that process and the Pension Supervision Department of CMDA still has the capacity to supervise the Pension Office. I think that was one of the most important projects that I was part of.

During my time with the CMDA, one very important work that I have done along with our CEO back then, Ms Shafeega, was promoting the corporate governance code. In Maldives, the biggest problem is lack of governance in companies. I think one of my focus over the past 3 years with the Ministry of Economic Development has been on improving service. When I came in, registration of companies took 3 days or so. Also, there was no specific service charter which gave the commitment and assurance to customers that this is what we offer. We believe that we have to put in place a system whereby every single person who walks into our Ministry is aware and able to seek the service. We have put in a lot of effort towards ensuring our staff have the training to provide the necessary services to customers. Therefore, we have implemented a queue system in such a way that our customers will be able to receive the service within 15 minutes.

I can now proudly say that in Maldives we are able to register companies within 20 minutes. Our processing mechanisms ensure customers who have all the necessary documents compiled together, even online requests, can be processed and done within 20 minutes.

The compilation of the Company Amendment Bill is another huge achievement. I would say it is going to revolutionise the way companies are registered, governed and deregistered.

What advice would you give to young people looking to follow in your footsteps?

My key message to the youth would be that they should build the tolerance level to be able to take on any challenge in the work environment or their personal life. Next time when they walk into their interview, I think they should be a little bit more prepared and they should be willing to take on all the responsibilities that come along with the job. When it comes to employment, there is a perception that one has to do only a specific type of job or that they should be placed at a specific level of hierarchy in an organization. I think it should not necessarily be that confined. From the people whom I have met in this field, most people who are really successful are those people who are willing. So one has to be willing to take on any responsibility to be successful.

However, I think in Maldivian context it is also important to understand that often youth are overwhelmed by parents’ hopes and expectations. I would say that the youth should also be able to identify and have hope in what they really want to do.

Where do you see yourself in the next few years?

Since 2009, one of those things that have really interested me is being able to share information or being able to lecture on something. So maybe I would go into the academia somewhere down the road. I think I would still be in public service. I believe that there is so much that I could give back to the people, be it in terms of initiating financial literacy programs, start-up programs and incubation. These are things that we can do and when it comes to financial literacy, I think that we lack literature. We have not been proudly promoting the history of the financial sector or the history of the economy due to that. I believe that literature in these areas will only help us lay down an adequate foundation for the future generation.