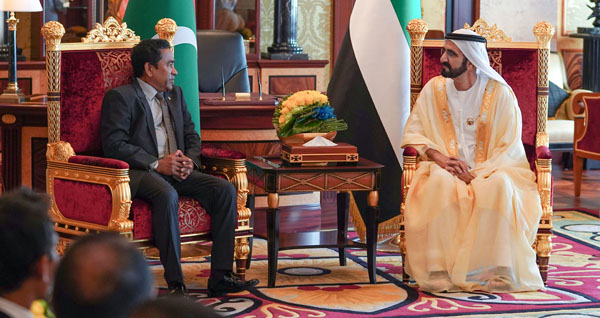 The Vice President and President Abdul Gayoom discussed bilateral relations between the UAE and the Maldives and ways to enhance them in fields of mutual interest.

Sheikh Mohammed welcomed Yameen’s visit to the UAE, and stressed the UAE’s keenness on developing ties with the Maldives across various sectors.

President Abdul Gayoom emphasised his country’s desire to boost cooperation in various domains, and praised the UAE’s pioneering stature at the regional and global arenas.

Sheikh Mohammed and the President also attended the signature of four official agreements including; investment protection, visa agreement, along with an agreement to cease double taxation, as well as the Velana International Airport development agreement.