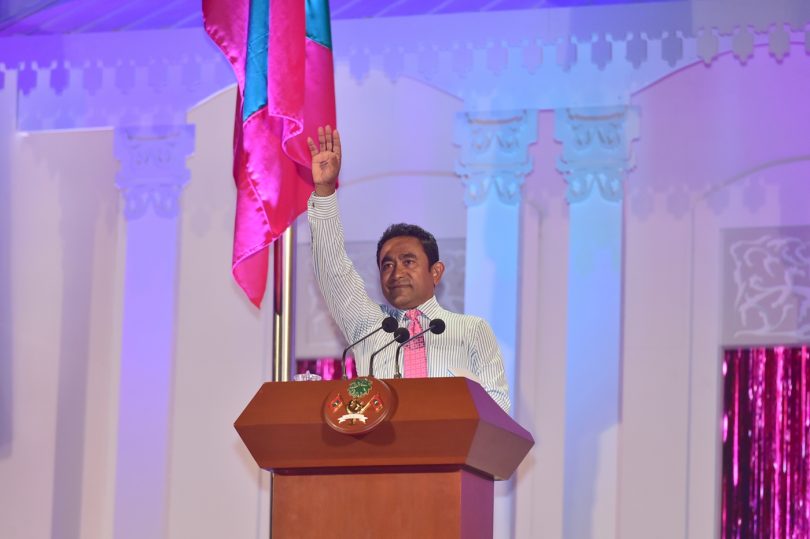 Five ministries have broken the law by not responding to right to information requests from the Maldives Independent, which wanted to fact check claims made by President Abdulla Yameen.

Yameen challenged “political leaders who say they do not see development” at a November 17 rally marking the four-year anniversary of his government.

He said his administration had completed 1,800 projects at a cost of MVR20 billion (US$1.2 billion), amounting to nine projects for each inhabited island including 24-hour electricity for all islands and sewerage systems in 37 islands.

Clean water projects had been completed in 135 islands, Yameen added, pledging to bring down household water bills in the atolls to the same level as Malé. Nine out of 10 households nationwide would see a 57 percent reduction.

The government completed 42 mosques, 770 new classrooms and built more school laboratories, and 78 percent of the population has access to safe harbours.

Yameen also claimed 100,000 new jobs were created in the past four years and that 50 new resorts would have started operating by the end of 2018.

The right to information (RTI) requests, submitted on November 23, sought to verify and fact-check these claims. The ministries contacted were: education; environment and energy; finance and treasury; housing and infrastructure; Islamic affairs and tourism.

The ministries had 21 days, including weekends and public holidays, to respond.

Only the Islamic ministry responded to the request before the 21-day deadline. However it refused to provide details of how the construction of mosques were funded, citing donors who wanted to remain anonymous.

The housing ministry and the environment ministry provided the information requested on December 18 – four days after the  deadline expired.

He also said sewerage projects were completed in 36 islands. According to the environment ministry, the number is 17.

Yameen said his government had built 42 mosques, but the Islamic ministry said it was 43.

The education ministry, responding within the 21-day deadline, refused to provide information because the RTI application was filed in English.

The RTI Act allows for applications to be submitted in Dhivehi and English. But the Information Commissioner, which regulates the RTI Act, was unable to confirm if the education ministry had broken the law or not.

The tourism and finance ministries, despite multiple calls, could not provide the information requested even after the deadline. Information officers at both ministries told the Maldives Independent they could not find the RTI applications.

The finance ministry information officer said she was looking into the request after the Maldives Independent gave her a receipt showing the application had been submitted.