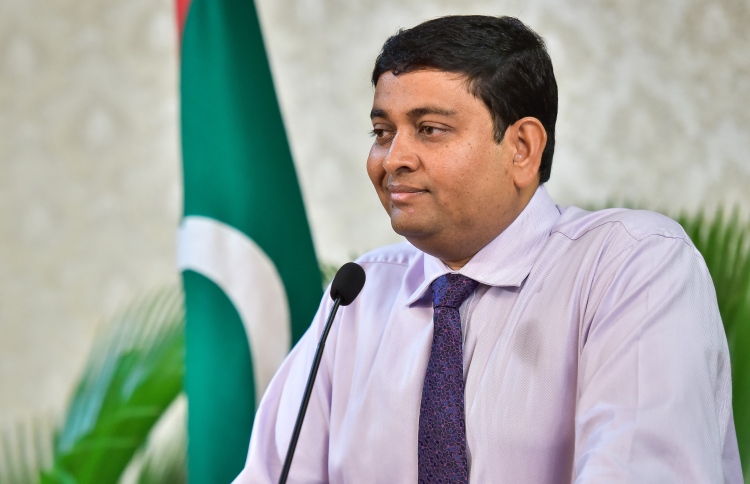 Fisheries minister Dr Mohamed Shainee on Wednesday hit back at former president Mohamed Nasheed’s claim that he can run for the presidential elections next year, stating that the latter has “no legal chance” of doing so.

Dr Shainee’s retaliation came in the wake of an interview Nasheed gave to Mihaaru in London on Tuesday, when he stated that the ongoing discussions between the United States and India about the Maldives’ political turmoil would pave the way for him to run in the presidential elections in 2018.

The minister stated that the government has not held talks with any other nations about the possibility of Nasheed running for the upcoming elections. He asserted that the elections will be held in accordance with the Maldivian Constitution without seeking the counsel of any foreign bodies.

“This is our Maldives; the decisions for this country will be made by Maldivians. The US’ talks about the elections has nothing to do with us,” said Shainee.

Describing Nasheed’s objective to run for president with the backing of foreign influence as “a fantasy”, the minister repeatedly declared that Nasheed has no chance without altering the Constitution itself.

“Such a thing might be done after a coup and the slaughter of Maldivians with foreign mercenaries. Under any other circumstances, it will not happen. The Constitution says nothing about an interim presidency.”

Further criticizing Nasheed for coveting the power to rule, Shainee said that Maldivians are wide awake to his “twaddle” and that everyone recognizes the ruling coalition of Progressive Party of Maldives (PPM) and Maldives Development Alliance (MDA) as the majority holder in the political field. He added that most of the population stands with the progress and development that incumbent president Abdulla Yameen is bringing to the nation.

There is no opposition candidate strong enough to defeat Yameen in the elections, he said.

Meanwhile, Nasheed has expressed confidence that he will receive the opportunity to run for the presidential elections. Declaring that the joint opposition can beat president Yameen either with a single candidate or multiple ones, Nasheed had further pushed for an interim presidency to bring about the reform envisioned by the opposition for the Maldives.