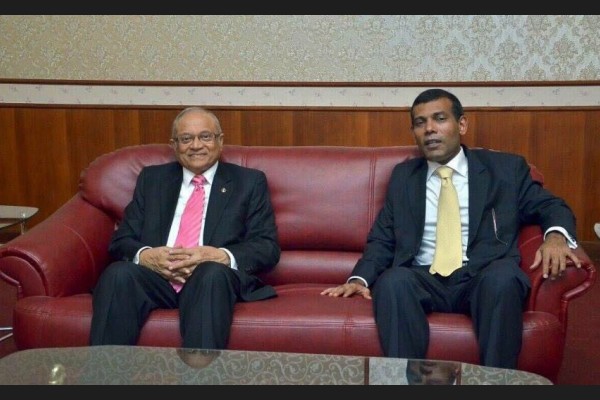 Former Presidents Maumoon Abdul Gayoom and Mohamed Nasheed have had their say after the Maldives decided not to participate in the United Nations General Assembly vote to include “The Responsibility to Protect and the prevention of genocide, war crimes, ethnic cleansing and crimes against humanity’ in its agenda.

Former President Maumoon sent out a series of tweets, calling it “a shame that Muslims Maldives” did not take part in the vote, especially as “there is a worldwide outpouring for Rohingya Muslims“.

When there is a worldwide outpouring of support for Rohingya Muslims, what a shame that Muslim Maldives did not participate in the UN vote!

..ethnic cleansing, war crimes & crimes against humanity. It is a shame that some of our top officials do not realise this! 2/2

“The vote on inclusion of R2P in the UNGA agenda is highly relevant to Rohingya Muslims as it calls for elimination of genocide, ethnic cleansing, war crimes and crimes against humanity,” he said, adding that “it is a shame that some of our top officials do not realise this.”

After receiving heavy criticism on its decision to not even attend the UNGA session, the government attempted to fix its reputation by responding that the vote had nothing to do with Rohingya Muslims, and that the reason it decided to abstain from the vote was “because it eroded sovereignty”.o

113 member countries had voted in favor of adding it to the UNGA’s agenda, while 21 voted against it. 17 countries had decided to abstain from the vote, including Maldives.

Responding to Maumoon, Minister of Fisheries and Agriculture Dr. Mohamed Shainee said that “it is a shame that you, Maumoon Abdul Gayoom, who ruled Maldives for 40 years did not understand that the vote was not about Rohingya Muslims“.

The former President had served as the President of the Maldives from 1978 to 2008, a period of 30 years.