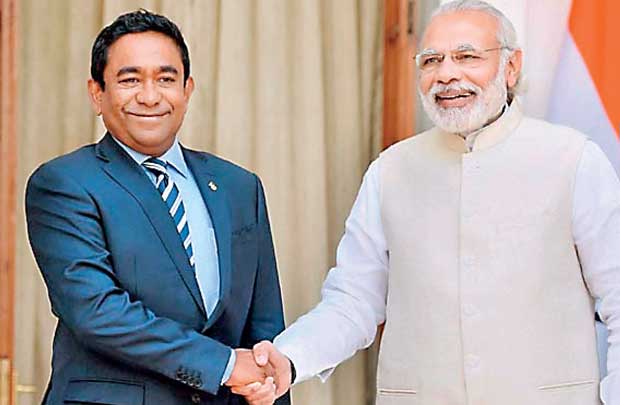 The Maldives has managed to wriggle out of a sticky diplomatic situation involving regional power India, thanks to President Abdulla Yameen’stimely conciliatory move, and the Indian government’s deft handling of the matter behind the scenes instead of flexing its muscles publicly.

Indo-Maldivian relations have been under strain since the ouster of President Mohamed Nasheed in 2012 and the coming to power of the pronouncedly pro-China Abdulla Yameen in 2013. Bilateral relations were on the verge of taking a turn for the worse recently when the Yameen administration took strong exception to a meeting which a group of opposition local body councillors had with the Indian envoy,Akhilesh Mishraa.The controversial dinner meeting took place in Gaaf Alifu Attol on December 11.

The Maldivian Local Government Authority (LGA) based in the capital Male, summarily suspended three elected councillors of the GaafuAlifu Atoll Council for three months for having a meeting with a “foreign diplomat” without prior permission from Male. The three suspended members were Fuaad, Ahmed Nazmeen and Hussain Adam, all belonging to the opposition Maldivian Democratic Party (MDP).

However, the circular suspending the councillors did not mention envoy Mishra and was phrased in general terms.

But the unsaid and a really touchy point was not that the envoy met some councillors, but that it was a meeting with councillors of the opposition MDP led by ousted President Mohamed Nasheed in the run-up to the September 2008 Presidential election which would be a do or die matter for both President Yameen and Nasheed.
President Yameen has irreconcilable differences with Nasheed and the MDP also because he suspects that they are attempting a regime change with the backing of interested foreign powers.

The LGA’s circular said that the GaafuAlifu Atoll Council officials had met a foreign diplomat even after it had cautioned them against doing so without written permission from the government in Male. But the leader of the council Fuaadsaid that the circular came after the meeting with the Indian envoy and not before.
However, the LGA circular cited Clause 115 (J) of the Maldivian Constitution, which makes the conduct of foreign relations a prerogative of the government in Male. It says that the constitution vests the office of the President with the power to “determine, conduct and oversee the foreign policy of the country, and to conduct political relations with foreign nations and international organizations”.

The LGA argued that if councillors continued to meet foreign representatives, “Maldives risks losing the look of a unitary state as stipulated in the Constitution and this would negatively affect Maldives’ foreign and domestic policy with implications on international treaties signed by the Maldives”.

Adding fuel to the fire, an MDP councillor tweeted about the meeting with the Indian envoy and even posted pictures with him apparently to show that the MDP has India’s backing.

Appealing for restraint and asking not to engage in negativity towards India, President Abdulla Yameen Abdul Gayoom reaffirmed that India is the Maldives’ closest friend and ally

The circular came as a surprise to foreign envoys because, hitherto, resident and accredited non-resident Ambassadors to the Maldives had been meeting Maldivian politicos at all levels without let or hindrance. Foreign envoys consider these meetings as a legitimate part of their diplomatic duty. It is also not possible to secure prior permission every time such a meeting is planned. Indeed the Maldives had previously placed no such restrictions. Indian envoy Mishra had himself met locally elected personnel and tweeted about the meetings. While India was quiet, hoping to handle the situation diplomatically and behind the scenes, Ambassadors from the US, UK, Australia and Germany lambasted the suspension saying it re-affirmed the undemocratic nature of the Yameen regime.

“A further restriction on democracy and transparency in #Maldives: it appears that local elected officials can no longer meet diplomats and civil society NGOs without central government permission. Why” tweeted US ambassador to Maldives AtulKeshap, who is based in Colombo.

“Since I met elected island representatives on Thinadhoo earlier today, all local councillors have been instructed that they may only meet diplomats and NGOs with prior permission. The latest unfortunate step in #Maldives, I’m sorry to say,” tweeted British Ambassador to Maldives James Dauris. “Elected local councils in #Maldives now need Home Affairs permission to meet foreign diplomats — why this further step backwards? #FreedomofExpression,” tweeted Australian envoy to Maldives Bryce Hutchesson.

But India, which does not believe in megaphone diplomacy approached the situation in a studied way. Keeping India’s deep and long-term interest as a neighbour with high stakes, the spokesman of the Indian External Affairs Ministry, Raveesh Kumar, merely said that the Ambassador in Male was engaging the host government on the matter.

He added that India and Maldives “have strong historical and civilizational linkages, and also at the people-to-people level.We are also committed to supporting democracy, development and stability in the Maldives.” There was no further word from New Delhi or from the embassy in the Maldives.

The ball was in the Maldivian government’s court and President Yameen himself came out with a conciliatory statement on Sunday which put the matter to rest.
Speaking in an Atoll he was visiting, the Maldivian President appealed to his countrymen not to antagonize India which he described as the “Maldives’ closest friend and ally.”

A statement issued by the President’s Office said: “While appealing for restraint in criticism and asking not to engage in negativity towards India, especially in the media, President Abdulla Yameen Abdul Gayoom reaffirmed that India is the Maldives’ closest friend and ally.”

“President Yameen reiterated that his Administration would never entertain negative sentiments towards India, and highlighted that Indian assistance formed an invaluable contribution to the Maldives.”

Yameen further said that the government is currently working towards a Free Trade Agreement between the Maldives and India.\

The President that Maldives and India have very close and long-standing relations at the government to government and people to people level with a number of Maldivian students studying in India and a number of them going for medical treatment to India. In turn, many Indians are working in the Maldives.
He castigated the small group in the opposition and the local and international media who have tried to create a rift between the Maldives and India.

Touching on the controversial Free Trade agreement between the Maldives and China, which has created ripples in India, Yameen stated that it would have no impact on the diplomatic or political relations with any other country as it is purely commercial in nature. Yameen also made it a point to mention that his government was working on an FTA with India.

The Maldives had reportedly promised to conclude an FTA with India first. It is perhaps this which made Indian spokesman Raveesh Kumar say in one of his press conferences that India hopes that the Maldives would stay committed to its “India First” policy.