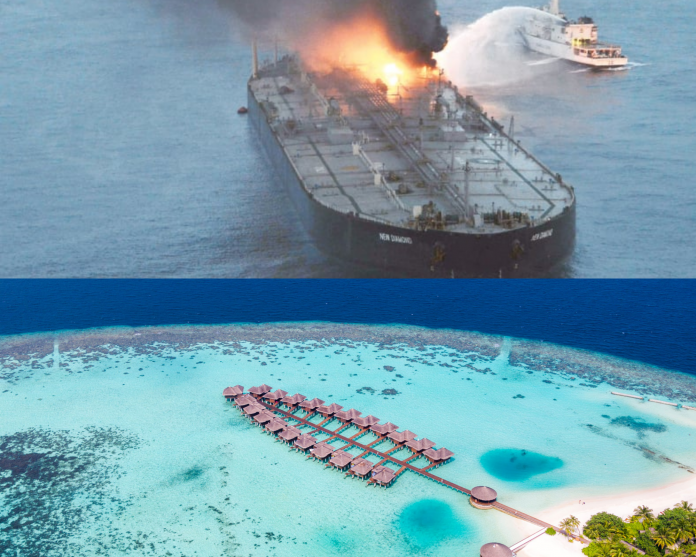 The Panamanian-registered vessel, which began burning on Thursday, is carrying about 270,000 tonnes of crude oil. The Indian Coast Guard and the Sri Lankan navy said the 330-metre (1,000-foot) vessel was towed overnight to deeper waters some 60 kilometres (37 miles) away from the coast.

Dharshani Lahandapura, the chair of Sri Lanka’s Marine Environmental Protection Authority (MEPA), warned that an oil spill from the ship would be “one of the biggest environmental disasters not only in the region but in the world”.

However, Sudantha Ranasinghe, the head of Sri Lanka’s Disaster Management Centre, said the situation was “not as bad as it seems”. “The fire has not spread to the cargo. Once the fire is put out, the vessel will be towed further away into deeper waters,” he told the AFP news agency.

“There is no oil slick reported,” the Indian Coast Guard said after a joint effort by the two countries to contain the blaze. Sri Lanka’s navy said rescuers were still spraying foam on the vessel but that the blaze had been brought under control.

The Maldives, about 1,000km (625 miles) southwest of Sri Lanka, has a large coral eco-system in its waters and expressed concern over a potential spill. “The Maldives needs to watch this oil spill carefully and take all precautions to prevent it from reaching her shores,” Ahmed Naseem, Maldivian minister at the president’s office, wrote on Twitter.

During August, Mauritius declared a “state of environmental emergency” after a Japanese-owned ship that ran aground offshore began spilling tons of fuel. The serious incident had stained the stunning turquoise waters of the popular Indian Ocean destination to black and brown.

Following the fuel oil spill in Mauritius, Tanker Trackers found out that the Maldives is not equipped to handle any oil spills either. Nonetheless, the anchorage of Malé takes in tankers and even hosts STS (Ship-to-Ship) oil transfer sessions.