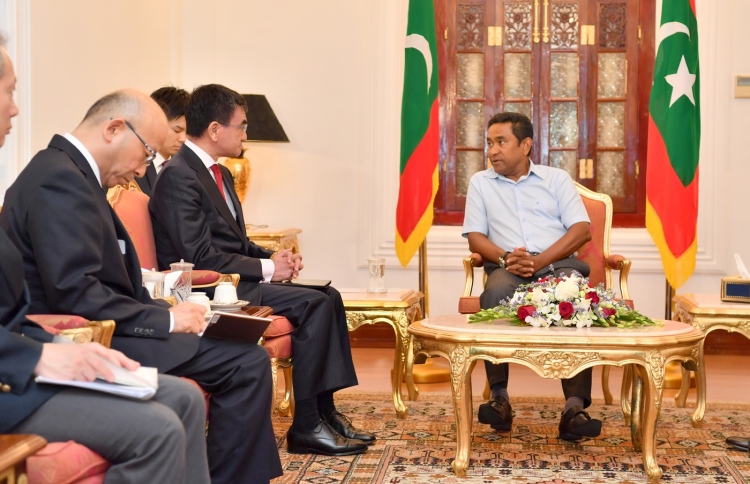 President Abdulla Yameen has sought Japan’s support for the Maldives’ candidature for the 2019 term of the United Nations Security Council.

The president made the request during a meeting with the Japanese foreign minister, Taro Kono, on his one-day official visit to the Maldives on Saturday.

The government stated that the Maldives’ bid to get a seat on the UN Security Council in 2019 was accepted by many countries and a campaign was already underway to seek support.

Yameen also extended his warm greetings and good wishes to the Prime Minister of Japan, Shinzo Abe, during the call held at the presidential palace.

The President’s Office revealed that the Japanese foreign minister had asked for the Maldives’ support for Osaka’s bid to hold the World Expo 2025.

According to the President’s Office, discussions were focused on identifying potential areas of mutually beneficial investment opportunities for Japanese businesses in the Maldives.

In the meeting, Yameen also emphasized on environmental issues, noting that climate change remained a critical issue for the country, and expressed appreciation for Japan’s proactive role in tackling climate change globally. He further assured that the Maldives would continue to work closely with Japan to gradually shift towards renewable and alternative sources of energy.

Kono had in return expressed Japan’s willingness to continue offering expertise on the latest technology to assist the Maldives on this issue, according to the President’s Office.

On his first official trip of the New Year, the Japanese foreign minister thanked the president for the support extended from the Maldives for Japan’s initiative to promote security and maritime safety.

He also emphasized on establishing a solid counter-terrorism mechanism in Asia through joint efforts to ensure maximum safety and security for the 2020 Olympic Games to be held in Tokyo. Moreover, the minister expressed interest in providing promotional sports assistance ahead of the Games and to organize cultural exchange programs.

Kono had concluded his official one-day visit and returned to Japan late on Saturday.

Apart from the call on the president, official bilateral meetings were also held on Saturday. In this meeting, both countries decided to hold further talks in order to strengthen interrelations between them. The talks to be held annually would focus on political, economic and international relations issues related to Japan and the Maldives.