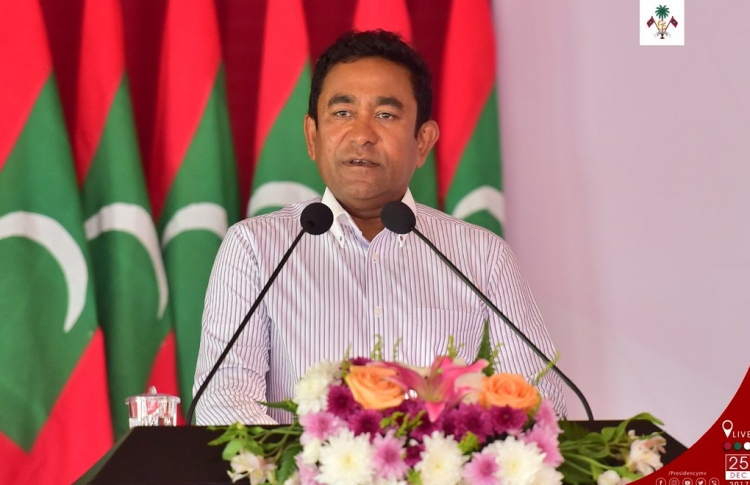 President Abdulla Yameen on Monday presented a three-step formula for citizens to follow to vote in the presidential elections next year.

Speaking after the inauguration of the fresh water supply system in Lhaviyani atoll Hinnavaru island during his current trip to three northern atolls, Yameen declared that the people must be wary and discerning with regards to the words of political figures ahead of the upcoming elections. He stated that despite the presence of capable political leaders in the Maldives, “their stances on any single topic are vastly different”.

Thus, the president cautioned the people to differentiate between reliable and dishonest leaders in order to elect a proficient president in 2018. Describing the voting ballot as akin to a multiple choice question, Yameen called on the people to eliminate wrong answers based on three aspects.

“The first one is to consider that, while the Maldives is a 100 percent Muslim country, are there any candidates who, based on their past and reputation, can be relied on to remain true to the religion of Islam? This is a very easy question,” said Yameen as he remarked that all citizens are aware of certain leaders that would fail to meet this standard.

The second formula, according to the president, is to contemplate the sensibility or ridiculousness of the words of political figures.

“For instance, today we’re talking about issues such as lacking water and sewerage systems in large islands like [Hinnavaru], or the lack of protection from natural disasters. These are things the government must fulfil. But if President Yameen talks about going to space, then you realize this is an alien from another world (not a sensible person),” he said.

As a third step, Yameen declared that the people must ensure that the candidate they vote for has the necessary education, experience and skill to implement and act on his pledges.

“These are three very simple things,” he said as he proclaimed that anyone who fell short of even one would not be a suitable leader for the Maldives.