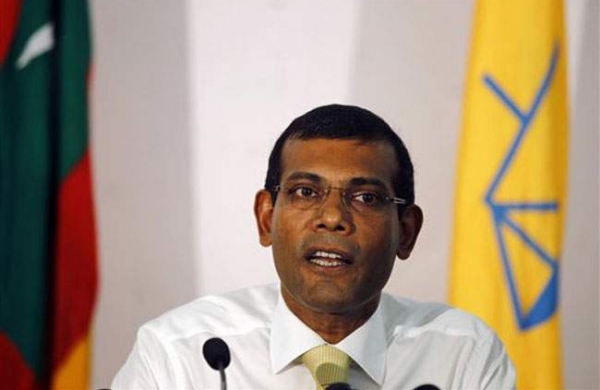 Male’s ambassador-designate to Colombo, Mohamed Hussain Shareef, in a statement said that Nasheed, the first democratically elected president, is a “fugitive” and left the Maldives midway through a 13-year-jail sentence after being allowed to seek medical treatment abroad.

“It is ironic that Nasheed and his legal team are accusing others of attempted kidnapping when he himself is a fugitive from the law for the well-publicised kidnapping of a chief judge,” he said.

“Should a relevant authority in the Maldives request the Embassy to seek the assistance of relevant authorities in Sri Lanka to return him or any other fugitive in accordance with our constitution and laws, all avenues available through diplomatic channels will be utilised to fulfil the obligation,” Shareef said.

Amal Clooney, international legal counsel representing Nasheed, yesterday raised concerns about a threat made by the Maldivian ambassador-designate to Colombo to detain their client in Sri Lanka and forcibly return him to the Maldives.

Clooney said any attempt by a Maldivian diplomat to detain Nasheed in Sri Lanka would constitute a violation of international law as well as Sri Lankan criminal law.

She had said that Nasheed should not be returned to the Maldives to serve a sentence that resulted from a “sham trial”, and it is incumbent on the Sri Lankan authorities to ensure that his rights are respected while he is in their country.

The new Maldivian envoy to Sri Lanka told a local television station that he would have Nasheed arrested in Colombo should he visit and would deport him.

Nasheed travelled to London in January last year on prison leave for medical treatment and has since then remained in self-imposed exile. He travels frequently to Sri Lanka.

The envoy alleged that Nasheed and his supporters have continuously attempted to create diplomatic friction between Sri Lanka and the Maldives, including assertions of bias by the Sri Lankan Government.

“Our ties with Sri Lanka are multi-layered and based on an age-old practice of non-interference in each other’s domestic politics. The close ties between our two governments and responsibility of officials on both sides have been instrumental in avoiding misunderstanding in spite of erroneous claims by Nasheed and senior officials in his 20082013 regime.

The Maldives has faced tough international criticism over the jailing in March 2015 of Nasheed following a rushed trial which the UN said was politically motivated.

Yameen, who came to power following a controversial runoff against Nasheed in November 2013 faces international censure over his crackdown on dissidents.