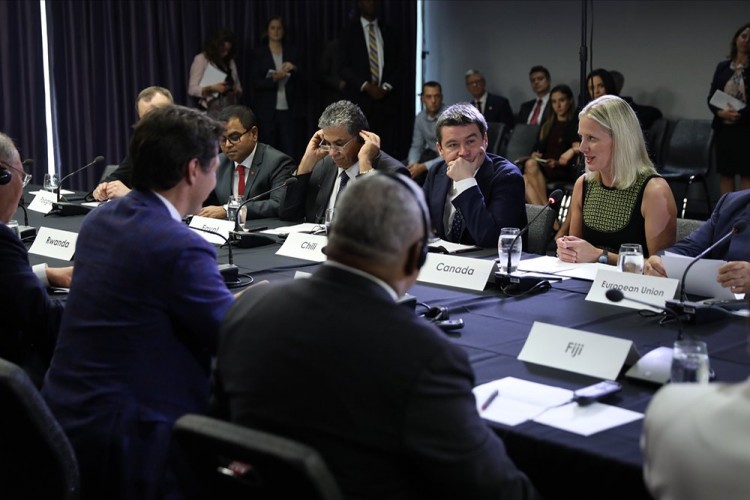 Minister of Environment and Energy Thoriq Ibrahim has on Saturday, participated in the Ministerial Meeting on Climate Change in Montreal, Canada.

The high-level meeting is hosted by Canada, China and the European Union “in order to talk about the next steps of implementing the 2015 Paris Agreement” and to “discuss major points of contention to prepare for the conference in Bonn, Germany” in November. Canada’s Prime Minister Justin Trudeau has also participated in the discussion.

While representatives from 35 countries took part in the meeting, Maldives had participated as the Chair of the Alliance of the Small Island States (AOSIS).

“Speaking at the conference, Minister Thoriq had announced that Maldives is with the victims of the recent cyclone in the Atlantic,” said the Ministry, adding that he also stressed that “this gives clear signals that time is not our side and we need to further action on the implementation of the Paris Agreement by enhancing our dedication”.

During his visit to Canada, Thoriq also called on PM Trudeau and Canada’s Minister of Environment and Climate Change Catherine McKenna, and gave them the “highest assurance that [the Maldives] will keep committed and will continue to work together with rest of the world in combating climate change“.

“They congratulated the excellent work being carried under the leadership and Chairmanship of Maldives for the AOSIS,” added the Environment Ministry.

Minister Thoriq is to head to New York next, to attend the 72nd United Nations General Assembly (UNGA). The Maldives delegation is headed by Minister of Foreign Affairs. Dr. Mohamed Asim.