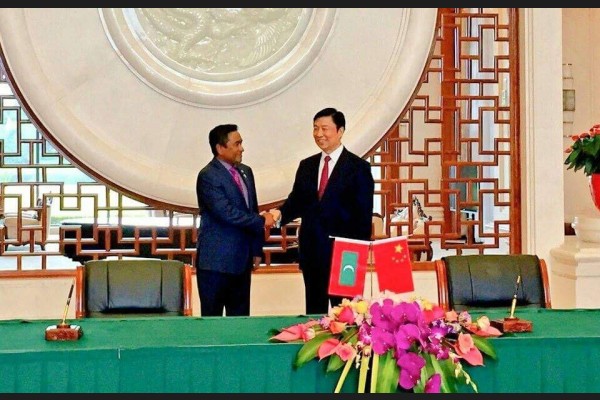 President Abdulla Yameen Abdul Gayoom has conveyed warm felicitations and sincere good wishes to the President of the People’s Republic of China, Xi Jinping, on the occasion of the 45th anniversary of the establishment of diplomatic relations between the two countries.

In his message to the President of China, President Yameen took note of the long history of trade and cooperation between the Maldives and China, spanning over centuries, for the betterment of both countries and their peoples. The President also conveyed deep appreciation for the continued assistance from China and the concerted efforts to enhance the economic development, widen commercial activities, and foster people to people engagement, conducive to the socio-economic development of the Maldives. Furthermore, the President expressed eagerness to continue working closely with the President and the Government of China and further bolster the existing Sino-Maldives relations of friendship and understanding in the years to come.

Diplomatic relations between Maldives and China was established on October 14th, 1972.

While the Government had focused on developing relationships with China, the relationship had come under severe scrutiny, with many claiming that President Yameen had ‘sold’ the nation’s foreign policy to the highest bidder.