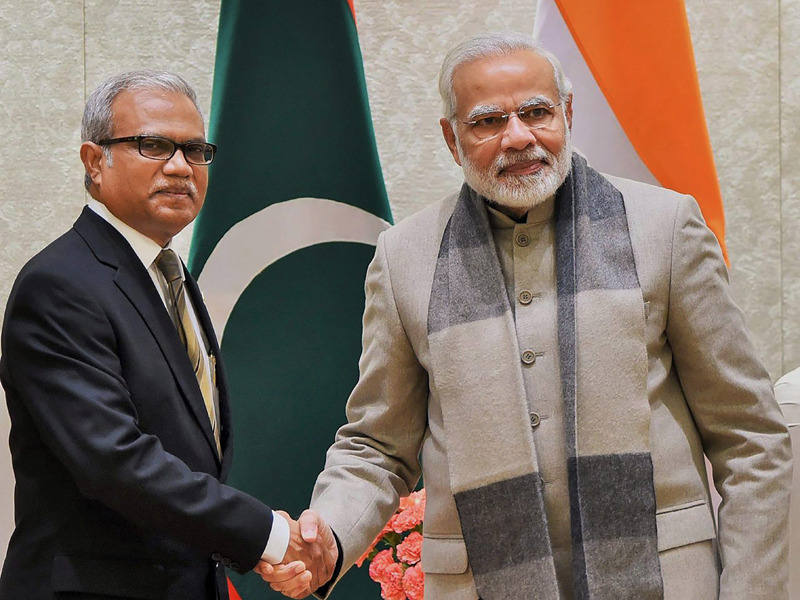 NEW DELHI: India and the Maldives pressed the reset button in ties with the latter’s foreign minister Mohamed Asim briefing his counterpart Sushma Swaraj and PM Narendra Modi about Male‘s position on a host of issues that seemed to be plaguing the bilateral relationship in recent times.

Asim, who visited India also as President Abdulla Yameen’s special envoy, reiterated Male’s ‘India First’ policy and, according to a statement issued by India, emphasised that the Maldives attached the highest priority to its ties with India.

According to official sources here, Asim did not just assure India that Male will do nothing to jeopardise India’s security interests but also said in his meetings with both Modi and Swaraj that the Maldives would expedite work on India’s developmental projects which the two countries had announced during Yameen’s visit to India. Progress on these projects had been patchy until now.

Discussions in Asim’s meetings with Modi and Swaraj centred around strengthening of the development partnership between India and Maldives and enhancing defence and security cooperation, said the Indian government.

Asim also invited Modi to the Maldives, the only Saarc country which the PM has not visited until now. Modi agreed to visit the Maldives “at a suitable time” as he affirmed that India would always remain a reliable and close neighbour of Male. Asim is also said to have discussed with his Indian counterpart Maldives’ recent FTA with China. Male continues to maintain that it would soon like to have a similar agreement with India.

“Swaraj met Mohamed Asim, foreign minister and special envoy of the President of Maldives. Both had productive discussions to strengthen bilateral relationship keeping in mind ‘India First’ policy of Maldives and our policy of ‘Neighbourhood first’,” the ministry of external affairs (MEA) spokesperson Raveesh Kumar tweeted. “External affairs minister (Swaraj) conveyed our commitment to achieving the full potential of our relationship in line with India’s Neighbourhood First policy,” an MEA statement said.

Foreign secretary S Jaishankar alsio paid a “courtesy call” on Asim. Highlighting President Yameen’s ‘India First’ policy, Asim reiterated the importance of further strengthening the historical ties between the two countries, said Male in a statement. “He further expressed gratitude to the government of India for their valuable contribution towards the socio-economic development of the Maldives. Prime Minister Modi assured that the Maldives has, and will always remain, a close friend of India. Further, the Prime Minister assured that India would extend its support in all areas of cooperation,” it said.