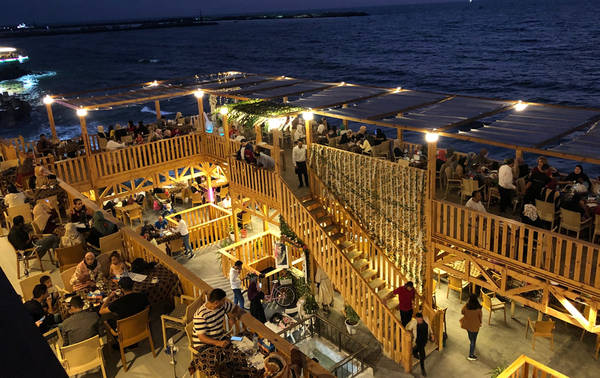 GAZA – Only days after it opened, the Maldive Gaza cafe and restaurant has become the ‘place-to-be’ for Gaza Strip inhabitants.

Its style, location on the sea and low prices are all geared towards attracting the average resident in the Palestinian enclave.

The cafe is the brainchild of Emad al-Biaa, a 42-year-old engineer and father of five children. Alongside a few partners, he focused from the very name itself on the desire of the enclave inhabitants to have fun and forget about their daily concerns, opting for the name of a place evoking tourist paradises far away.

They asked the town council for permission to lease an area near the beach that had previously been used as a rubbish dump and to be able to convert it for commercial uses.

As an engineer that had worked for over 10 years in a construction company, Emad noted that he had treated the cement blocks on which it was built on the sea in such as way as to make it stable in the saltwater. He then built the three-storey restaurant-cafe using only wood that is treated regularly to protect it.

Two-thirds of the venue is over the water, like in the Maldives and this – Emad told ANSA – allows those inside to feel like they are floating, feeling heightened by numerous opening in the floor so that clients can see the sea below.
One corner is sectioned off for couples that are engaged to be married, as is customary in the area, and another is decorated with an old bicycle adorned with plastic flowers and coloured lights.

Since it was opened, Emad said, these are the two places on the three floors (the top one is reserved for special events) where almost everyone takes photos to remember the visit.

From dawn until 2 AM, the Maldive Gaza is full of both youths and families enjoying the view out over the sea.