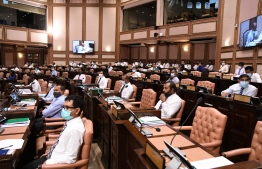 President Ibrahim Mohamed Solih on Wednesday submitted the names of 17 nominees, for the four vacancies on the National Integrity Commission (NIC), to the parliament.

The nominations were forwarded to the parliamentary Committee on Independent Institutions for evaluation and approval.

The vacated slots on the NIC came about in the wake of a parliamentary report pushing for the dismissal of four commission members, citing failure to carry out their mandated duties.

Then-Vice President Hassaan Hameed and members Khadheeja Abdulla and Ahmed Ameen resigned from the NIC after the parliament endorsed the proposal in July, advising President Solih to dismiss them.

The president also sacked the commission’s president, Ahmed Sulaiman, this Monday in accordance with the parliamentary report.

NIC’s failure to investigate police negligence concerning the disappearance of journalist Ahmed Rilwan, despite probable cause for suspicion, was stated as one of the key arguments for dismissing the four members.

The report further noted that NIC had not responded to the parliamentary committee’s request for information on how the commission would ensure undisrupted operations amid the ongoing State of Public Health Emergency declared over the COVID-19 pandemic.

Presently, only Colonel (Retired) Ahmed Jihad remains on the NIC. He was appointed in late 2019 by the incumbent administration.