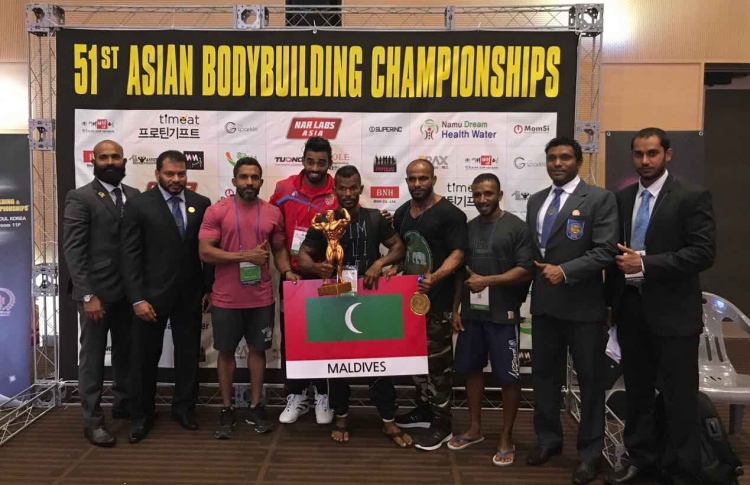 Shaaheen Ibrahim Didi (C) pictured with the trophy after he won the gold medal at the 51st Asian Bodybuilding and Physique Sports Championships 2017.

Shaaheen bagged the gold medal in the 55kg category on Wednesday.

Prior to Shaaheen’s victory, the highest achievement of the Maldives in an Asian championship was Hassan Saaid finishing fourth in the 100-metre sprint of the Asian Athletics Championships last July. Saaid also won the bronze medal in the same category at the Asian Grand Prix earlier in April.

The Maldives has previously won gold, silver and bronze medals in South Asian bodybuilding contests. However, this marks the Maldives’ first gold medal win in a contest comprising all of Asia.

Shaheen, who was the runner-up in this year’s Mr Maldives bodybuilding contest, went up against nine athletes from eight Asian countries in the 55kg category. Following Shaheen’s victory is Mongolia which won the silver medal, Nepal with bronze, and Thailand and India in fourth and fifth place respectively.

Shaheen’s previous achievements include winning bronze at the 2014 Asian Bodybuilding and Physique Sports Championships in Macau, where he competed in the 160 centimetre fitness category.

Maldives Bodybuilding Federation’s General Secretary Ali Shareef declared Shaheen’s triumph a proud achievement for the nation, proclaiming it as the Maldives’ greatest accomplishment in a sport to date.