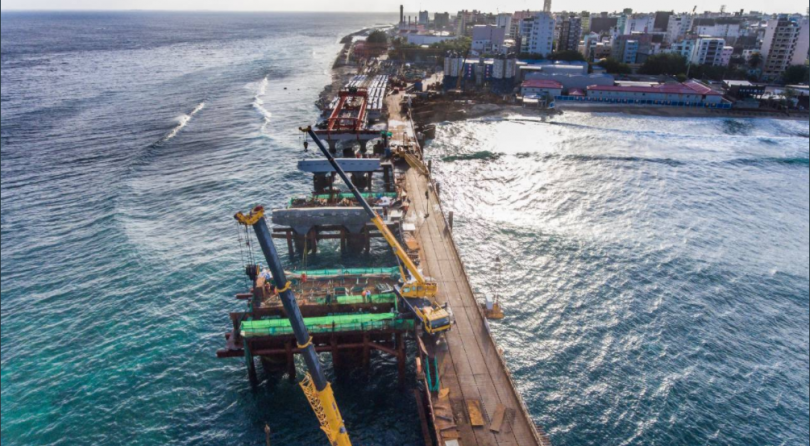 Land reclamation preparations have commenced for the development of the link road to connect the main airport island of Hulhule and reclaimed suburb Hulhumale.

Development of the four-kilometre long Hulhule-Hulhumale link road, which is connected to the landmark overwater bridge currently being developed between Hulhule and capital Male, is awarded to Hunan Construction Engineering Group of China for USD 24 million (MVR 370 million).

Shedding light on the project’s progress, Housing Development Corporation (HDC)’s Managing Director Mohamed Saiman announced Monday that construction of a bund wall is now underway prior to the land reclamation. He added that a dredger will arrive in the Maldives in a week’s time.

“To make this link road, a large area of the lagoon surrounding the causeway [which currently links Hulhule and Hulhumale] has to be reclaimed,” he said, elaborating that the necessary tests have already been carried out for the project.

MD Saiman also noted that some development projects of Hulhumale face obstructions since flight routes of seaplanes, which travel to or from Velana Airport International (VIA), are directly above the island. Hence, authorities have decided to change VIA’s water runway during the link road’s development, he revealed.

The link road is to be developed at the same width as the China-Maldives Friendship Bridge, with four lanes. The China-Maldives Friendship Bridge spans from the southeast coast of Male to the southern end of Hulhule beyond the airport runway strip. The current causeway linking Hulhule and Hulhumale runs from Hulhule’s southern end to the eastern coast of Hulhumale. The new project will expand the current causeway and reinforce the new highway.

MD Saiman had previously said that the link road will be completed in time for the bridge unveiling.