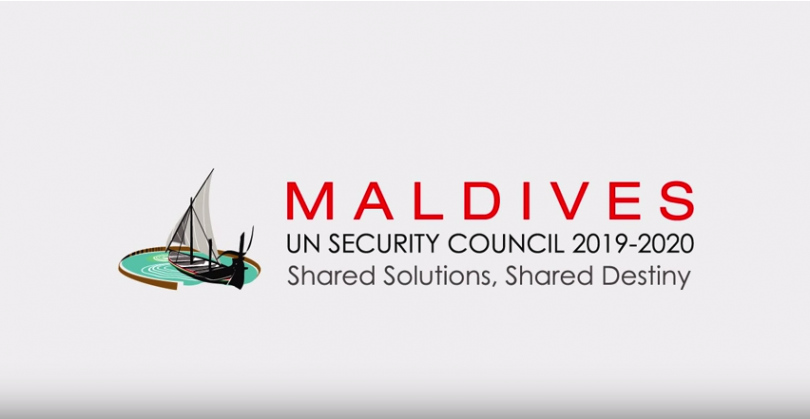 The original Dhivehi article was published on Vfp.mv website on 28th March 2018.

Amidst shaping of Maldives foreign policy, the most recent talk you hear is Maldives government campaigning hard to win United Nations Security Council (UNSC) seat. When Japanese Foreign Minister visited the Maldives recently, President Abdulla Yameen requested for his support to win the UN seat for the Maldives.

What is noteworthy is that in the statements released by President Yameen’s government kept saying that the Maldives also has the capability to step on the same line as other countries, in the international community. This is more obvious in the statements released on several occasions by the administration, in relation to the UN Human Rights Council and since the overthrow of the government on 7 February 2012, backed by police and the military.

As mentioned earlier, if there exists such a ‘fantasy’ as to establish the Maldives as a rich and powerful country in the international community, amongst the Maldivians, it would be a very useless thought. Like the earth’s rotation, we know very clearly the behaviour of the poor, rich and powerful people. An individual, a community or a country is no different in this.

The next is the question of why it is so important for the Maldives to win a seat at the UN Security Council. The UNSC is a committee to solve ‘serious’ issues amongst nations. Like, sending troops to a country during a war-like situation and imposing sanctions to maintain and restore peace and security. Among these security measures, the mentioned situations are by its nature very delicate matters. This raises the question, is it wise for a small country like the Maldives to vote for and interfere with such matters of other countries? Unquestionably, the most benefitting ‘diplomacy’ is having close relations with all the countries. To gain the genuine love of the neighbouring countries. Moreover, to maintain good relations with international donor communities and work to achieve the full benefit of the opportunities available for the Maldivians.

The other point to note is when contesting for the UN Security Council, and if the Maldives wins the seat, what good will it do for its citizens? Firstly, it would be something that requires a lot of spending budget. To campaign for it and to hold different events, it will require millions to be spent. Additionally, Maldives ‘image’ in the international world, isn’t as how we want it to be. The evidence of that is, Maldives left the Commonwealth and the several statements released by the European Union and the UN, regarding the Maldives. Similarly, by looking at the statements released by the US Embassy to the Maldives, British High Commission to the Maldives and other missions to the Maldives, it is very clearly understood.

Very recently, we saw Maldives government trying for UN Human Rights Council seat and at the last minute backing out of it. Some said that after realizing that they won’t win the seat, they gave it up. It could be a more likely scenario, than vice versa. 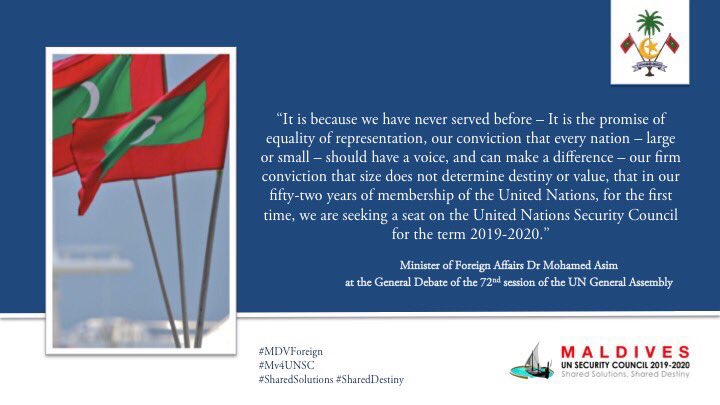 Looking at the Maldives foreign service, it is lead by well educated and experienced people. However, the question is, is Maldives’ foreign policy in the direction that derives the most benefits to its citizens? We have mentioned earlier about the Maldives exiting from Commonwealth. We are witnessing the relations being severed with the neighbours. Talks about Maldives’ rising debts are continuously mentioned. Yet, when things are like this, we cannot see any concern from those top officials in the foreign service. Every statement released says that Maldives’ foreign policy is an exemplary one. And the decisions they made are of extremely benefiting to its citizens. Regardless, these statements will be archived and people who come after them will talk about them.

Lastly, I want to ask, to achieve what, are you interested in the UNSC seat? Before initiating the works, was any calculations done? Was any research done on how other countries perceive the Maldives? Based on what was said earlier and on the current Maldives – international relations, it is more likely that this is something that won’t happen. Those who have taken the responsibility of their posts have an important duty to make foreign policy decisions which benefits its citizens. Thus, it is best to abort, before it’s too late. To make use of employees’ time and public fund, in doing things that benefit the Maldivians is more than ever required now.