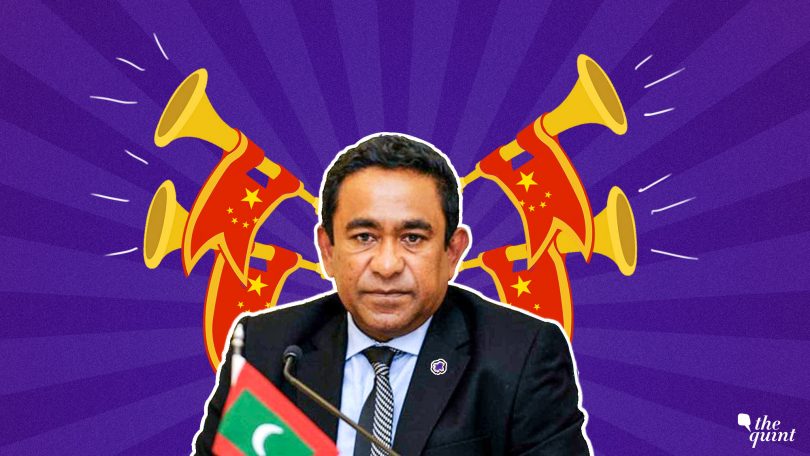 Is Maldives employing a typical Chinese tactic of using its state-controlled media to throw barbs at India and conveying its points of differences while the government sings a different tune of being friendly to New Delhi? This appears to be so. It’s also an eye-opener for the way Maldives under President Yameen has been tilting towards China at India’s expense.

The newest trend emerging from Maldives is that like China unleashes its vast media machinery (entirely state-controlled) against India from time to time, like it did during the 73-day-long Doklam standoff, the small archipelago inhabiting just four lakh people has also started this tactic. This is something unprecedented.

Never before India faced such a hostile Maldivian media as it is facing of late under the regime of President Yameen Abdul Gayoom.

Much of the Maldivian media toes the government line with just a few exceptions. But the India-bashing is being done by those outfits which are directly controlled by President Yameen and are published in Dwivehi, the local language.

Consider the following three classic examples, all India-bashing commentaries in Dwivehi published in last ten days. For the first time it has happened that the entire content is being made available in English.

We begin with the most talked about article published by Vaguthu, which created a furore in India and was eventually taken down by the newspaper from its website. This is the most stinging piece of all, published on 18 December and authored by Adam Nawaaz. Here is the rough English translation of the entire article, titled “India is not a best friend, it is an enemy!”

“India is one of the countries who’s always the closest to Maldives. It has been many years that the food, household items and clothes have been imported to Maldives through India.

“In recent history also India was the ‘best friend’ that helped Maldives the most in any event. Or the closest friend. Even by looking at the terrorist attack in 1988, the hospital India built to develop Maldives’ health sector or the help given by India to provide basic needs only shows the ‘heart-to-heart’ relation between India and Maldives. A lot of Maldivians believed previously that India doesn’t want Maldives to suffer a loss and that India will be the closest friend or ‘best friend’ till death.

“Today India looks at Maldives with jealousy. With selfishness. With hatred. What is the reason?

“Today some capable people of India said openly that Maldives’ government needs to be changed by sending Indian military. Having this thinking even if it is due to an invitation of some Maldivians, estimates how much India hates Maldives now.

“Previously and now also India does lots of unethical things as such. In the civil war that took place in neighboring Sri Lanka for more than 30 years, India is suspected of providing weapons and other aids to the terrorists.

“While looking at Kashmir also, it has been many years that India has been acting against many international policies, laws and regulations. While seeing how India treats their Muslim citizens it shows that India doesn’t have the care, kindness and respect it had before.

“India’s “behavior and policies” are changed after a strict Hindu Narendra Modi came to power. He has a history of taking strict actions, especially against Muslims.

“There are three to four reasons that India is jealous of Maldives. One is the development and success Maldives is receiving. Being jealous that Maldives is becoming a capable country that wouldn’t have to beg India on everything.

“Second reason is that Maldives is an Islamic country. Doing good deeds for Muslims is not India’s policy now. Now India’s policy is giving Muslims any damage or disturbance possible.

“Third reason is that Maldives strengthening ties with China. India does not approve China giving aid to other countries for development projects and giving free aid.

India will be jealous of any country that China befriends in International arena. It’s visible clearly on India’s actions.

“We will face sad things while living. Knowing that your closest friend is jealous of you, your heart will experience sad and deep feelings. But there is happiness along with that. That is, knowing the truth of your closest friend before they put you in trouble.

Another pro-Yameen Maldivian media outfit Rumaalu2.com published a scathing anti-India commentary on 18 December by an anonymous author. The commentary cites reasons why Maldives was forced to go away from India. Here is a rough English translation:

“India, being the biggest country in south Asia, is not entitled to influence other countries of the region. Even though this is what we Maldivians believe, this is not the thinking of neighbouring India.

“India believes that all the countries in this region are a possession of India. Everything in the regional countries should happen how India wants it to. According to India, India is the “dada” (boss) of this region.

“Every country should develop and succeed the way India wants. They should be on the road of development, but if India thinks they may go further than that, that country is a danger to India’s safety. This is what’s happening to Maldives today.

“Maldives taking back the main airport from India’s GMR in 2013 and India troubling Maldives is an example of that. The reason why India stopped the export of stones (used for construction) to Maldives in 2013 while the quota India gave to Maldives had one year left was taking the airport back from India’s GMR Company.

“In the same time period, Maldivians going to India for medical treatment faced troubles in getting visa. In reality, India played with the citizens. Maldivians were troubled. Then it was Dr Waheed’s government. India forced Maldivians to bring Nasheed to presidency in 2013 by restricting visas to Maldivians. When India restricted visa, Maldivians headed to Sri Lanka.

“As Maldives is an independent country and believes that Maldives has the right to go forward by itself. In 2013 people elected a leader who had ‘guts’ to save Maldivians from India’s slavery. President Yameen won’t wait to beg India to give an MRI machine. He bought that machine at the government’s own cost. President Yameen turned to eastern side (read China) to make the time when India turned Maldives into an economic slave a thing of the past. Maldives turned to China which is the fastest developing economy in the world.

“Maldives got up after dusting itself, while India kept restricting visas and not selling big stones. The bridge (not clear which bridge) is also getting built even if India didn’t give a loan. Dharumavantha hospital is also finishing.

“India cannot obstruct the fast pace at which Maldives wants to develop. Maldivians won’t even give that chance. It’s not even India’s right.

“Even if India doesn’t want to accept, the truth is that India’s policy that paves way for slavery is what forced Maldivians to dust themselves and get up.”

See the following article published by Vaguthu on 25 December, where the author has criticised India on the issue of Myanmar’s Rohingya Muslims.

Following is the rough English translation of the article authored by Ibrahim Mohamed and titled “Rohingya Muslims in India: Cannot celebrate eid, also their children harassed”:

“Myanmar’s Rakhine state’s Rohingya Muslims are one of the people who are in the poorest condition right now. They are suffering a lot due to the cruelty of extremist Myanmar terrorist soldiers and Buddhists. In neighbouring Bangladesh also they are living in this condition.

“The Rohingya Muslims who migrated to India are living in poor conditions. They are separated from the society and are forced to bare many difficulties to live. This is a story as such…

Across these editorials, the tactic is simple: pro-Yameen media outfits are trying to influence the Maldivians on Hindu-Muslim lines, considering that Maldives is entirely (100 percent) a Muslim nation.