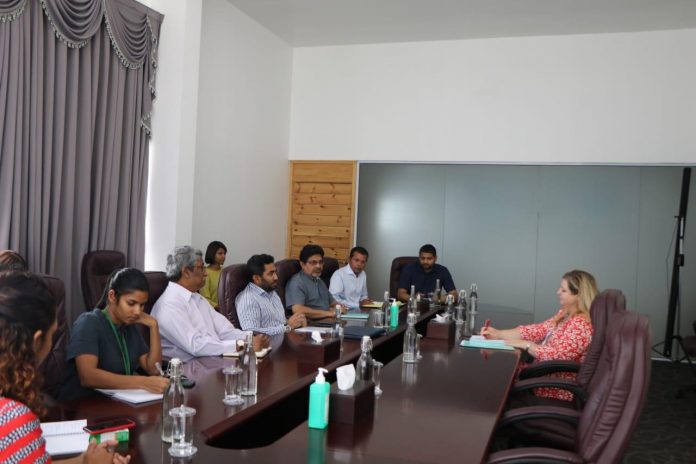 The Minister of Health Abdulla Ameen, State Minister of Foreign Affairs Ahmed Khaleel and officials from the President’s Office and the Ministry of Foreign Affairs met with the United Nations Resident Coordinator, Ms. Catherine Haswell, to discuss how the United Nations system further collaborate and work more closely with the Government during the ongoing emergency health response, to tackle the Covid-19 situation in the country and address the economic impact on the country.

During the meeting which was held today at the Ministry of Foreign Affairs, Ms Haswell briefed Government on the efforts undertaken by the resident UN agencies in the country, to support the Government in its emergency response. She mentioned that the Maldives stood out as a good example of a country that has taken early steps to intervene and to stop the spread of the disease, and committed the full support of the UN agencies to complement Government’s ongoing efforts in addressing the situation, both in terms of procurement needs and technical expertise.

The Minister of Health mentioned that the most challenging issue facing the Government is the procurement of essential medical equipment and protective gear for the country, faced with the global situation that the demand for such equipment is outstripping the available supply. The Minister also briefed various other challenges and the steps taken to respond to such challenges.

The Minister of Health thanked the United Nations for the extensive support it had continued to provide to the Government through its various agencies. The Government looked forward to greater collaboration and cooperation with the UN system and other international partners, as it moves towards addressing the immediate urgency arising for the medical emergency, and the social and economic impact on the Maldives.