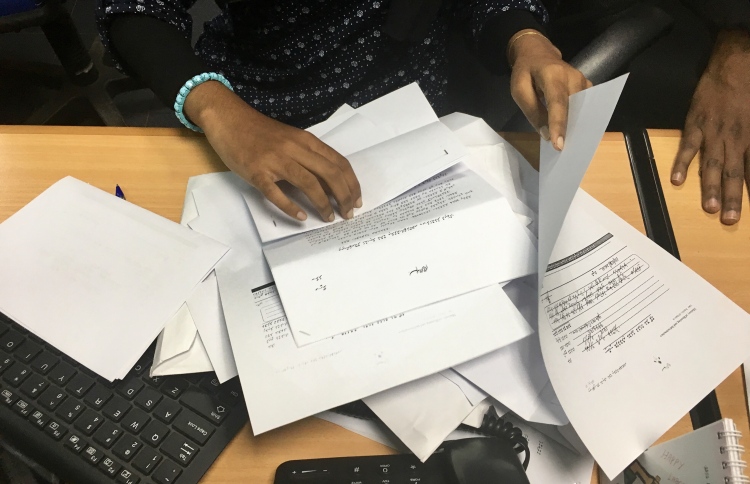 The Anti Corruption Commission (ACC) on Wednesday searched the Ministry of Housing and Infrastructure’s headquarters for evidence after numerous complaints of corruption were lodged at the institution about the distribution of flats in the government’s first social housing project.

According to the graft watchdog’s chief Hassan Latheef, it has formed a special team to investigate the claims made against the housing ministry about the distribution of the 661 flats from its first housing project in the reclaimed suburb Hulhumale earlier this month.

Some 15,000 people had applied to buy flats from the government’s housing project when applications opened back in 2014. When the government finally announced the recipients of the flats for two housing categories earlier this month, many applicants had called foul on the distribution procedure as the ministry withheld the recipient’s identities and how points were allocated amongst the applicants, revealing only the form numbers of the recipients.

“The team will be checking each application form of the flat recipients individually, throughout the day,” Latheef said about the graft watchdog’s presence at the housing ministry’s office.

When asked whether ACC has acquired the recipient list that was withheld by the housing ministry, Latheef told Mihaaru that, by the end of the investigation, it will know whether the flats were distributed fairly, and how many points the 661 flat recipients received.

He added that ACC will prioritise the case hasten the investigation as it is a matter of public interest.

Several opposition lawmakers had even taken the matter to the parliament, filing a petition at its oversight committee over the lack of transparency in flat distribution. The committee had unanimously agreed to ask the housing ministry to reveal the details on how the flats were distributed; however, the ministry had responded by only detailing the policies used in distributing the flats. The ministry continued to withhold the details of the point system that was used to determine who should be given the flats, and any information on the recipients of the flats.

An opposition lawmaker in the government oversight committee, MP Rozaina Adam had criticised the housing ministry’s oblique method of refusing to provide the flat distribution details that were specifically requested, noting that the Constitution mandates government institutions to divulge any information as requested by a parliamentary committee. She warned that the housing ministry’s refusal provides an opening to litigate Housing Minister Dr Mohamed Muizzu.