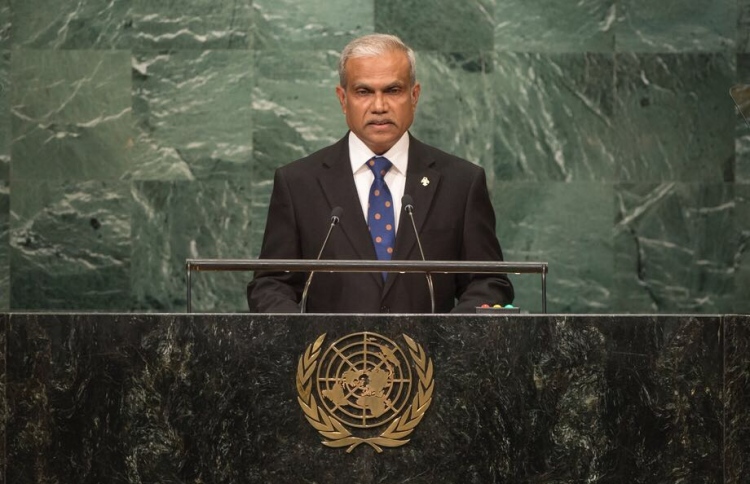 The Maldives abstained from voting on a motion to deliberate initiative against the genocides, killings and persecution in various countries at the 72nd General Assembly of the United Nations, following which the government has come under fire from both the opposition and public.

The motion “Responsibility to Protect and the Prevention of Genocide, War Crimes, Ethnic Cleansing, and Crimes Against Humanity” – shortened to R2P – was proposed by Australia and Ghana. It was successfully placed on the UN agenda for deliberation with the votes of 117 member countries voting in favour, which include Iraq, Saudi Arabia, United States, United Arab Emirates, Brazil, Denmark, Israel, Japan, Malaysia, New Zealand, Qatar, South Korea, Spain, Turkey, Yemen, Tunisia and Ukraine.

The total number of nations that voted against deliberating the motion was 21, including China, Myanmar, North Korea, Russia, Iran, Pakistan, Sudan and Syria.

Meanwhile, 17 countries including Zambia, Uzbekistan, Turkmenistan, Tajikistan, Seychelles, Mauritius, Greece, Lebanon and Libya stayed neutral on the vote. Notably, the Maldives is the only member country of SAARC that abstained from the vote.

The government immediately came under fire, with people claiming that the government’s decision to abstain from the critical vote indicates failure to follow through with its verbal stance against the plight of the Rohingya, a Muslim minority that is under bloody persecution from the government of Myanmar.

“Not about Rohingya Muslims”

Amidst media reports and public buzz on social media, the Permanent Mission of the Maldives to the UN tweeted Saturday to defend the move, stating, “Contrary to reports by some, the vote today at UN was a procedural vote whether to include R2P in 72UNGA, and not about Rohingya Muslims.”

The Ministry of Foreign Affairs followed shortly after, issuing a statement that rebuts the talk on social media, declaring that the UN vote was a merely procedural one to decide whether R2P should be included in the UN general assembly.

Asserting that the vote was not about the Rohingya Muslims, who “were not even named in the vote”, the foreign ministry stated that the Maldives always condemns the persecution of the Rohingya with the harshest words. Noting that the island nation called on the UN to take action in September as well, the ministry claimed that the government had long decided to abstain from the R2P vote as it would facilitate the stronger powers of the world to interfere with the domestic affairs of countries.

Censuring the Maldives’ neutrality on the vote, the opposition coalition on Saturday countered the foreign ministry’s statement, declaring that the UN vote on prevention of genocide and ethnic cleansing was central in putting the plight of the Rohingya on the table for deliberation despite the lack of specific names in the motion.

The former parliament speaker, Henveiru North MP Abdulla Shahid proclaimed that the turnout of events at the UN session this Friday is clear evidence that the foreign policy of the Maldives has been “sold” to foreign bodies.

He stated that the Maldives’ stance at the UN assembly indicates that the country’s foreign policy has fallen out of the president’s hands to the grasp of other countries.

In a bold claim, MP Shahid alleged that the Maldives’ decision was influenced by China, one of the key nations that voted against the motion. He noted that the Maldives is currently deeply in debt to China, with whom the incumbent government is arguably developing the strongest relations.

“The nations that voted against this motion include one that is attempting to gain colonial power over us under the guise of aiding our development projects. To put it directly, the Maldivian government’s action leaves room for suspicion that it was done on the order of the Chinese government.”

Among those that took to social media to slate the government’s decision were former presidents, Maumoon Abdul Gayoom and Mohamed Nasheed.

In a series of tweets, former President Maumoon pointed out that the UN vote was relevant to the Rohingya Muslims of Myanmar, as the motion calls for the elimination of genocide, ethnic cleansing, war crimes and crimes against humanity.

“When there is a worldwide outpouring of support for Rohingya Muslims, what a shame that Muslim Maldives did not participate in the UN vote!” he said.

Hundreds of Rohingya have been killed in military crackdowns in the state of Rakhine in Myanmar, with buildings in Rohingya villages razed and set ablaze while villagers have been raped, tortured and murdered. Several thousands have fled to Bangladesh to escape the bloody persecution while the United Nations have accused the government of Myanmar of committing “crimes against humanity” and carrying out “ethnic cleansing” of Rohingya Muslims.

Myanmar’s State Chancellor Aung San Suu Kyi refuses to discuss the quandary of the Rohingya. The Nobel Peace Prize laureate’s government refuses to recognise the Rohingya as an ethnic group in Myanmar, and has blamed the violence in Rakhine State on the “terrorists” in the region.