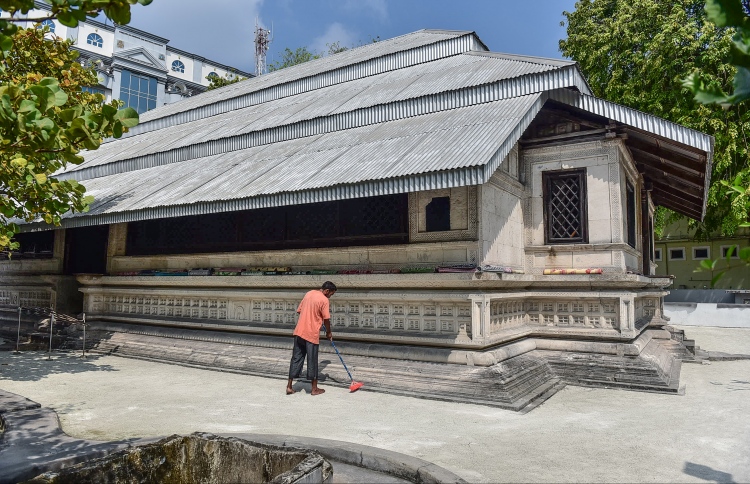 The government on Monday annulled its earlier notice seeking contractors to develop a cafeteria in the grounds of the Old Friday Mosque in capital Male.

The housing ministry on Sunday had revealed plans to develop a garden and café in the grounds of Old Friday Mosque, one of the oldest and most ornate mosques in the Maldives. Renowned for its decorative carvings, lacquer work and calligraphy, the coral stone mosque was added to the tentative UNESCO World Heritage List in 2008.

The revelation had sparked outrage and protest from the public, particularly from history lovers, several of whom accused the development as another of the government’s ploys to destroy historical sites and structures around the Maldives.

The ministry had at first refuted the allegations, assuring that the development works would be conducted such that they would not damage any of the historically significant structures on the Friday Mosque grounds. However, the ministry on Monday decided to withdraw its notice for a project contractor, acknowledging the concerns raised by the public.

“[We] haven’t decided to call off the project. But due to the concerns of many, we’re annulling the notice to conduct further research,” explained the ministry’s executive coordinator Hassan Waheed.

Meanwhile, fresh fears have been also been raised that developing a café in the grounds of Old Friday Mosque will disqualify the site from the UNESCO World Heritage List. According to Transparency Maldives’ senior project coordinator Ahmed Tholaal, who holds a Degree in Heritage Management, any sort of development in the buffer zone of a heritage site would cause the site to lose its overall heritage value.

The Department of Heritage is yet to officially comment on the issue.