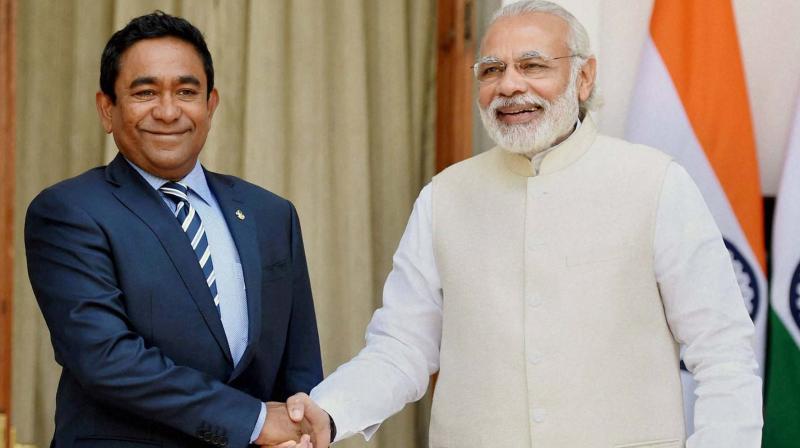 The Maldives are strategically located in the Indian Ocean and its value to an adversary of this country is obvious.

India’s ties with the Maldives appear to be entering a renewed phase of uncertainty. Its ambassador Akhilesh Mishra has been treated indelicately. Three local government officials who called on him were suspended. The signal appears to be to keep India’s principal envoy in Male at arm’s length.

Orders have been issued to the effect that all contacts with the diplomatic community and NGOs will need official clearance. Perhaps this is just to indicate that India is not being singled out, although it is hard to resist that inference.

Barely a week before the Indian ambassador was sought to be indirectly punished for being in touch with local officials — unusual for a country with which long-standing friendship is proclaimed — President Abdulla Yameen signed a free trade agreement with China in Beijing and rammed it through his Parliament without discussion. Details of the agreement are yet to emerge. Until that happens, it’s hard to say to what extent trade or investment ties with India will be impacted.

New Delhi, meanwhile, is pleading with Male to keep its “sensitivities” in view. This is the sense the official spokesman left while briefing journalists recently. This is practically an admission of having little leverage or influence left with the Maldives leadership, a sorry state of affairs for neighbourhood diplomacy which reveals a reversal of close security relations with Male even after the Maumoon Gayoom era had ended in the Maldives. It does appear that New Delhi has been either complacent or negligent.

Until not so long back, India had the friendliest of ties with the Maldives, the tiny island group in the Indian Ocean and a Saarc member. But that appears to be a thing of the past. This calls for a look at where things are going wrong and how best to apply correctives. The Maldives are strategically located in the Indian Ocean and its value to an adversary of this country is obvious.

The current goings-on indicate that, within Saarc, the Maldives could be lining up alongside Pakistan in subtle ways, with both acting in concert with China to discomfit India, although at the level of formality the island state continues to proclaim an “India First” policy.

In recent years, religious groups in the Muslim-majority country have been taking inspiration from Pakistan and the more regressive Arab elements. At the political level, they have found continuous support since the constitutionalist coup against former President Mohammed Nasheed, the first head of the country to emerge through a multi-party process and clean elections. Since Mr Nasheed’s ouster, ties with India have worn a desultory look, and Male appears to be letting China in to step into the breach. India’s problems will only increase when trade and investment relations are upped to the security domain.