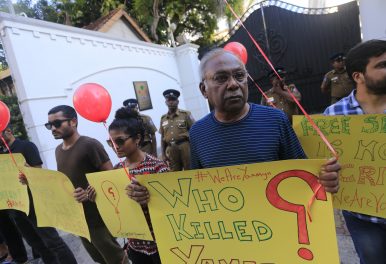 More than three years ago, in August 2014, Ahmed Rilwan disappeared after being abducted at knifepoint. Aside from his abductors, no one knows whether he is alive or dead — perhaps buried on one of Maldives’ 1,200 islands or thrown into its famous blue water.

If Rilwan is alive, shackled somewhere in a tiny cell, his abductors may have already told him about the brutal murder of his close confident and good friend, Yameen Rasheed, in April 2017.

Political unrest, radicalization, and the intimidation of journalists and human right activists have plagued the island nation in recent years. Some politicians are even suspected of hiring gangsters to issue death threats – or worse. Rilwan’s disappearance and Rasheed’s murder are just two signs of the increasing danger of religious or political dissent in the Maldives.

Maldives: Torn Between Democracy and Autocracy

An archipelago in the Indian Ocean, Maldives was long a sultanate. In 1953, after a period as a British protectorate, Mohamed Amin Didi, the first president, abolished the sultanate temporarily. He led the country to progress in education and women’s rights. But these transitional years were interrupted by turbulent events. In 1978, Maumoon Abdul Gayoom became president and led the country into a dictatorship. Political opponents were crushed under his regime.

The pendulum swung again in 2008 when several political parties came forward to contest Maldives’ parliamentary elections. Mohammad Nasheed, a historian and journalist and a strong critic of Gayoom, became president.

However, Nasheed was forcefully ousted in 2012. Abdulla Yameen, a half-brother of Gayoom, took over as Maldivian president in 2013. Yameen moved to crack down on dissent, whether opposition parties or media criticism.

Since Yameen came to power, the media has been under increasing threat in the Maldives. Journalists who speak against government corruption or religious radicalization are now confronting radical violence, harassment, and defamation lawsuits in the light of a controversial law passed in 2016. As a result, Maldives stood at 117th out of 180 countries in Reporters Without Borders’ 2017 Press Freedom Index. The detention of journalists and activists is common practice to restrain critical voices. Worse, those who express dissent could face extralegal abductions or even violence.

In one high profile case, Afrasheem Ali, a religious reformist and member of Parliament, was brutally stabbed to death in October 2012. The same year, a journalist named Ismail Rasheed, nicknamed “Hilath,” was attacked. The attackers slashed his throat, but he survived because a vital artery was missed by millimetres.

In August 2014, Ahmad Rilwan, a prominent independent journalist with the news website Minivan News (now Maldives Independent) who frequently wrote about secularism and religious extremism, disappeared. Later, police found he had been abducted at knifepoint. There was reason to believe that he was kidnapped by members of Kuda Henveiru, a violent group in Malé. The government was reluctant to investigate the case too deeply, which led some to suspect a state-supported attempt to silence those who criticize the government or radical Islam in Maldives.

Rilwan had adopted moyameehaa, which translates as “madman” in Dhivehi, as an online pseudonym. Rilwan explained the choice himself: “the one who speaks rationally will be considered a madman when living among an irrational people.” He was right.

Rilwan’s abduction cannot be seen an accidental crime. It is an attempt to shake the secular, liberal, and progressive image of the country. Enforced disappearances are nothing new in South Asia. India, Pakistan, Bangladesh, and Sri Lanka all have long records of enforced disappearance cases. In each country, institutionalized impunity has ensured that almost no one is brought to justice for human rights violations in such cases. Sadly, the same proved true in Maldives.

Rilwan and Yameen Rasheed had been close friends. Rasheed left no stone unturned in seeking justice for Rilwan’s abduction. For three years, Rasheed questioned the administration, wrote extensively, and organized protest marches against the disappearance of his friend, but Rilwan’s whereabouts are still a mystery.

A young IT professional, Rasheed was a social media activist. Through his blog, The Daily Panic, he presented bitter but factual observations of the daily politics of Maldives. Rasheed used The Daily Panic as a platform to, in his words, “satirize the frequently unsatirizable politics of Maldives… also it provides a platform to capture and highlight the diversity of Maldivian opinion.”

Rasheed was pained with the increasing Islamic radicalization in the country and could not keep himself from speaking against it. That led to the first death threat against him in 2011. He also did not remain silent after the alleged coup against President Nasheed in 2012. Through his blog, he fought to keep democracy free from autocracy.

In one of his blog posts, Rasheed recalled Rilwan once told him Islamism was a “tool to prey on the young and vulnerable who became foot soldiers in a political power struggle between corrupt forces – one made even more distasteful to him because it invoked the name of God and employed it for the basest of human desires.” His friend’s abduction made Rasheed speak against religious radicalization and politicization of religion even more vocally. For this, Rasheed received several death threats. He reported it to the police, but to no avail.

In a tragic case of irony, ten days before when Rasheed himself was brutally murdered, he shared a Facebook post in remembrance of Mashal Khan, a journalism student from Abdul Wali Khan University, Mardan, Pakistan who was lynched to death by a mob of students who accused him of posting blasphemous content online.

On the night of April 23, soon after returning from an award ceremony in London, Rasheed was murdered in Malé, the capital of Maldives. He was stabbed in the stomach, chest, neck, and head several times. He was declared dead shortly after being taken to Indira Gandhi Memorial Hospital.

According to critics, the investigation into his murder was misdirected. His murder scene was tampered with; evidence was displaced. Police tried to prevent Rasheed’s family from making public calls for justice, which raises questions as to authorities’ seriousness in pursuing the murder case.

Throughout South Asia, ideas and opinions challenging religious doctrines have not been tolerated. In this, Maldives is no different from India, Bangladesh, and Pakistan, where proponents of moderate and secular ideologies come under widespread criticism, and often meet with violent ends. Rasheed and Rilwan, along with many others, became the victims of such extremism. More worryingly, the violence was supported by militant groups and even politicians, who spread the idea that secularists are anti-Islam.

For those Maldivians who staunchly believe in democracy, individual freedoms, and justice, these are dark days.

Aaquib Khan is a freelance multimedia journalist based in Bombay, India.