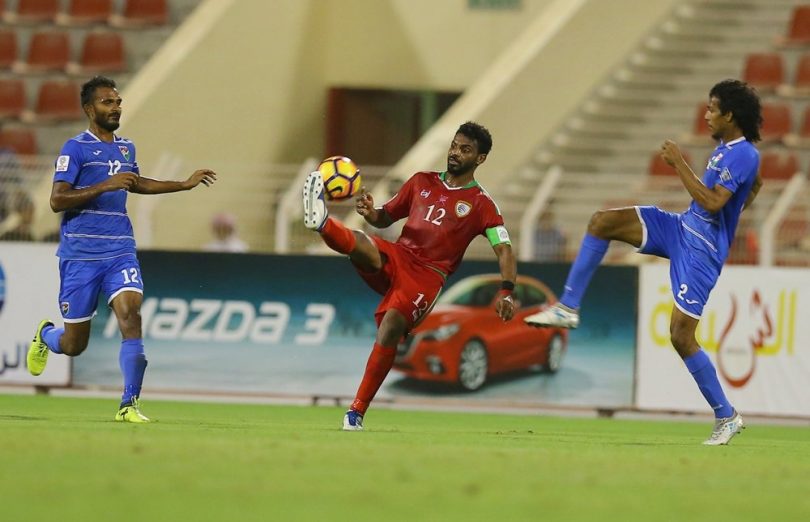 Oman’s Ahmed Mubarak ‘Kanu’ controls the ball during their Group D match of the Asian Cup third round qualifiers at the Sultan Qaboos Sports Complex on Tuesday. Photo – ISMAIL AL FARSI/Times of Oman

Muscat: Oman returned to winning ways with a comfortable 5-0 victory over Maldives in a crucial Group D match of the third round of 2019 Asian Cup qualifiers at the Sultan Qaboos Sports Complex on Tuesday.

After a lacklustre first session during which the hosts managed to score just one goal, Oman were all over the visitors scoring four more to the delight of home fans.

The victory enabled Dutchman Pim Verbeek-coached Omanis to stay second in the group behind Palestine, a 2-0 winners over Bhutan earlier in the day. Oman, who lost their previous match to Palestine, have six points from three outings while the groups leaders have win all the three matches they have played so far to take their tally of points to nine.

The top two teams from each of the six groups qualify for the 2019 Asian Cup. The twelve other teams – Australia, China, Iraq, Iran, Japan, South Korea, Qatar, Saudi Arabia, Syria, Thailand, Uzbekistan and UAE, have already qualified for the finals to be organised in UAE through the joint second round qualifiers of the 2018 FIFA World Cup and Asian Cup.

According to news posted on the Asian Football Confederation website, Mohsin Jouhar opened the score for Oman after just five minutes.

Oman took control of the contest from the first whistle and opened the scoring after just five minutes as Mohsin Jouhar’s corner kick surprised Maldives goalkeeper Mohamed Faisal and the visiting custodian could only help the ball into his own net.

But despite the fast start, Oman were unable to add to their tally in the first half having beaten Bhutan 14-0 last time out at home in Group D.

Oman, though, finally added a second goal two minutes before the hour mark as Al Hajri was on hand to slot home from inside the area after at least three Maldives defenders failed to deal with a cross.

And a third goal for the home side arrived 10 minutes later as substitute Al Yahyaei fired home from the edge of the penalty area after the Maldives had only partially cleared the danger.

Al Yahmadi struck the fourth with four minutes remining after first goalkeeper Faisal and then defender Shafiu Ahmed failed to clear the danger for the visitors.

And the home side wrapped up the victory with two minutes remaining as Al Hasani was first to react after initially seeing his shot from Saad Al Mukhaini’s cross saved by Maldives goalkeeper Faisal.