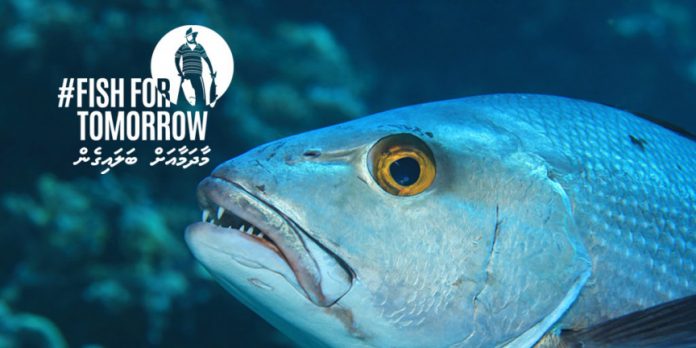 The #FishForTomorrow campaign, led by the Maldives Resilient Reefs project by Blue Marine Foundation, has secured public support for the protection of giant grouper and all species of parrotfish in the Maldives.

Over 27,000 people — more than five per cent of the population — responded to the campaign’s online polls that ran in the final week. 78 per cent of Maldivians said that they would now release a juvenile grouper or snapper if they caught one. 85 per cent said they would release a berried lobster, which is a national law. 78 per cent of people said they believe #FishForTomorrow has helped them better understand reef marine life, and 70 per cent supported legal protection for giant grouper and parrotfish.

Riyaz Jauharee said “Parrotfish are one of the most important groups of fish on coral reefs. Overfishing of them has devastated reefs in many countries and those reefs have never fully recovered. The Maldives must act now and ban fishing of Parrotfish before it is too late. “

FishForTomorrow was developed in response to the emergence of photos showing illegal fishing of nationally protected giant clams and unsustainable capture of other important species like parrotfish in the Maldives. Healthy populations of such fish on coral reefs are crucial for the Maldives’ fight against climate change.

The campaign aimed to familiarise and educate Maldivian people about the biology of particularly vulnerable reef species to ensure they understand why some species can be easily overfished and require such careful management.

Maldives Resilient Reefs used interesting facts about local fish species, like “Red snappers can live up to 55 years – longer than a bear!”, to shock people into changing their perceptions about fish.

Shaha Hashim, Maldives Project Manager says “We are already experiencing climate change impacts such as unprecedented storm surges and mass coral bleaching on a non-El-Nino year. We need to prioritize the management of reef fish populations so that they could provide the essential ecological functions for us to be able to live on these islands safely”.

During the four-week campaign, nearly 40,000 people — just under 10 per cent of the Maldivian population — visited the website and played the campaign’s “higher or lower” game where players were required to guess the answers to questions like “Which of these species can you legally fish?”. The campaign also started a viral trend for fishermen to post Instagram Stories of themselves releasing juvenile groupers and snappers.

The campaign was supported by a variety of “reef hero” advocates and influencers including popular band Detune as well as Ahmed Saeed (Gahaa), Riyaz Jauharee, and Shaziya Saeed (Saaxu).

Ahmed Saeed (Gahaa) said ‘”‘The campaign and its messages served as an eye-opener and tickled our conscience, certainly. I believe this probably is the first educational campaign about vulnerable reef fish in the Maldives. I consider it a great success and wish to thank the Maldives Resilient Reefs team for their efforts to educate the public and make people aware of sustainable fishing which is so crucial to the future of our country. I am definitely delighted to be a part of this noble venture.”