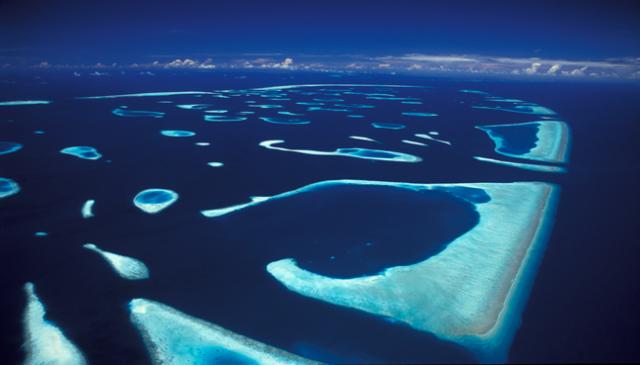 Yesterday, from The Guardian, Dhivehin finally learned what the government has in store for the Maldives. The publication ended weeks of speculation as to what Dear Leader Yameen has been planning for us ever since he got up close and personal with the unscrupulous and filthy rich Saudi royal family.

Oh, he dropped many hints: what is coming will change the very map of Maldives; it will be larger than your [little raffushu] imaginations; it will be development like no one has ever seen; it will make Maldives the envy of the world.

But he stopped just short of telling people what exactly it is. Because people’s reaction may endanger the deal. Maldivians cannot be trusted with the great plans he has for the Maldives.

But yesterday, through The Guardian, Yameen’s cabal finally chose to reveal details of what is to happen: residents are to be relocated to larger atolls, ‘leaving smaller islands ripe for development.’

Thousands of years old island way of life, sustainable development, living with the fragile environment, looking after the astounding natural beauty of the country for future generations—fuck all that. That’s airy-fairy arty-farty New Age hippie bullshit. Solar power, carbon neutrality? Pfft. Who has that kind of time to waste?

“We want to bring better living conditions to the whole country over a small period of time,” housing minister Mohamed Muizzu tells The Guardian.

This is the same Minister, whose unplanned haste to ‘bring development’ to Male’ has led to so many disastrous undertakings that people now say ‘That’s Muizzed” to describe projects–often work that don’t need doing, to fix something that isn’t broken–that become ever messier with each vain attempt to get it right at an ever increasing cost.

So here they are, these members of the kakistocracy ruling Maldives who– knowing so much what the people should want for themselves regardless of what they actually do–are ready to usher in what they call super development: geo-engineered artificial islands built as super-resorts, six-star hotels, high-end housing, high-tech centres, economic free-zones and foreign universities…all for ‘the global elite’, of course.

Meanwhile, the people of Maldives—the very people who have been excluded from the billions earned from 20 years of high-end tourism—will be relocated from their too-small-to-live-on-islands onto the so-called Greater Male’ Area where acres and acres of land is being reclaimed from the sea for this very purpose.

There they will live happily ever after in purpose built high-rises with running water, garbage bins, and plumbed toilets to shit in. Hip-hip-hurrah!

They will, of course, go to the same schools bursting at the seams as now, will be taught by the same barely qualified teachers, will work in the same dead-end jobs in the vast behemoth that is the civil service, or will clean hotel rooms and be bare-chested butlers in sarongs bowing deeply to provide the super-rich with ‘the authentic Maldivian experience’ as they sip their US$100 cocktails.

But, never mind. There will be plumbing at home.

Dhivehin shouldn’t expect much more. Their numbers are just too small for their existence to make any economic sense. What would be really economically viable would be to annihilate them, but then even the super-rich may balk at investing in real estate straight after a genocide. They’d wait at least one or two years; and time is money.

Once the plan is realised, number of visitors to the Maldives will increase from 1.3 million (over three times the population) to more than seven million within ten years (over 18 times the population). The Marine Research Centre—yes, the Marine Research Centre, which you’d think is looking out for the country’s natural resources—thinks this is a marvellous idea. In fact, according to Director Shiham Adam, it could be what saves the Maldives.

“People are investing huge amounts of money. They are not idiots,” says this very brainy scientist. “You can build an island in four weeks with suction dredgers”.

It would be absolute idiocy to think that this causes any damage to the environment; that it will kill the marine life, lead to erosion, destroy beaches, and shrink the entire land mass of the Maldives drastically. According to Shiham, all the existing resorts are just lovely little ‘mini marine reserves’, and there’s no reason (except science, which you don’t really need to consider when time is of the essence) to think the reclaimed super resorts would be any different.

What about sea-level rise that could put 75% of the Maldives underwater by 2100?

‘That’s not going to happen next year,’ says the director of marine research.

What does not happen before Yameen’s election in 2018, and 2023—or in his lifetime—should not concern us. That’s for the future. “We have immediate needs.’ And fulfil them these geniuses will. To hell with future generations, it’s not like they even exist.

This is what is ‘good for the people’, says Muizzu. He knows. That should be enough.

Let us all curtsy collectively to King Salman when he arrives, and pray that his rule over us would be as kind as it is over the people of Saudi Arabia, that he will consider our children with as much love as he does the children of Yemen. Let us all raise our hands in supplication to Yameen, our Saviour, for his Great Economic Vision. Let us all say thank you to all the super-rich billionaires and multinationals who are coming to save us from our inconsequential little lives in the shitty little ‘Indian ocean backwater’ called Maldives that so many people have mistakenly viewed as paradise on earth for so many centuries.