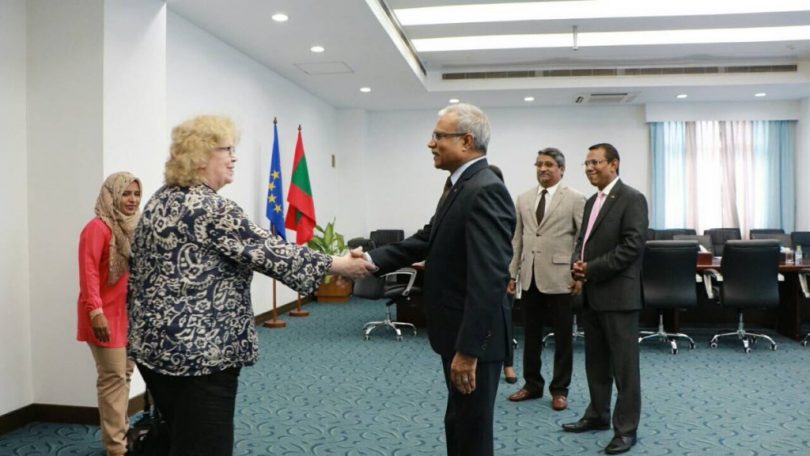 The European Union parliamentary delegate who had arrived in Maldives for a two-day fact-finding mission has met with Dr Mohamed Asim, the Maldivian Foreign Minister.

Foreign Ministry had stated the EU delegate had met with the local Foreign Minister for discussions on non-partisan talks. Further details of the meeting were not disclosed.

The four-member delegate had also met with the opposition party members, who had requested from the team to ensure a transparent conduct during the 2018 presidential elections.

The meeting held at Hotel Jen on Monday was attended by several prominent members of the allied opposition parties, which had recently started to identify as the ‘Maldives United Opposition’, were present.

This had included Yumna Maumoon, daughter of former president Maumoon Abdul Gayoom, Addu-Meedhoo constituency lawmaker Rozaina Adam along with several key figures of Gayoom’s faction. Apart from this MDP lawmaker of North-Galolhu constituency and North-Machhangolhi constituency Eva Abdulla and Mariya Ahmed Didi respectively, were among those who had included in the opposition delegation that met with the EU parliamentarian members.

EU had dispatched a delegate for a fact-finding mission following its parliament passing a resolution on Maldives, suggesting sanctioning on the Maldivian government and its leaders and well as boycott call on tourism.