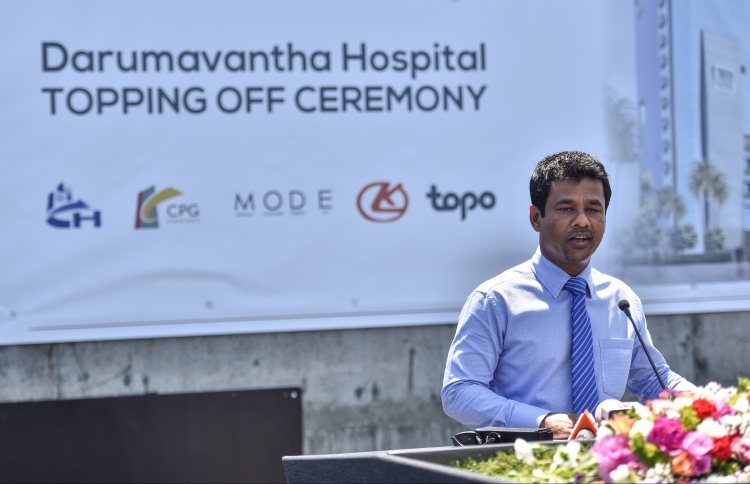 In the ceremony held on the top floor of the new hospital to mark the end of construction, the minister said that Dharumavantha Hospital will bring considerable changes to the Maldivian health industry.

He added that President Abdulla Yameen wanted to modernise the Maldives’ heath sector and make it amongst the best in the South Asian region, and that the new hospital is a testament of his vision.

The minister went on to praise the president, giving due credits to him for instigating the initiative to improve the nation’s health sector. He said that the recent great feats in the health industry were achieved because the current administration paid close attention to the necessities of the citizens.

“The new scope in the Maldivian health sector will positively affect the lives of ordinary Maldivian citizens. The president had an aim to bring down the number of Maldivians who go abroad to seek medical treatment, and I believe this new hospital will help achieve that,” Nazim said.

Further, the minister highlighted the importance of being transparent when taking on projects of such large calibre as it is funded by taxpayers’ money. He assured the citizens that there will be no misconduct in the development of the hospital.

Minister Nazim, and officials from the adjoining state-run Indira Gandhi Memorial Hospital (IGMH), had officiated the topping off ceremony of Dharumavantha Hospital, which is now the tallest structure in the capital.

While it was previously thought that the new hospital would be an extension of IGMH, the president last month revealed that ‘Dharumavantha Hospital’ would be a separate, new hospital.

The government awarded the project to Chung Hua of Singapore for a staggering MVR 2.1 billion, which has led to accusations by the opposition that there had been other companies that proposed lower bids. Mihaaru understands that the budget does not cover procurement of equipment for the new hospital and that MVR 2.1 billion is the expenditure only for construction.