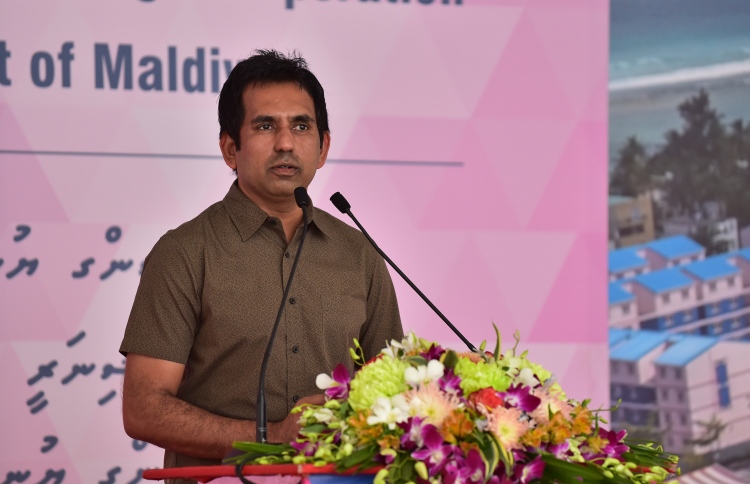 Economic minister Mohamed Saeed at the ceremony in which CMEC handed over 1,500 flats to the Maldivian government. PHOTO: HUSSAIN WAHEED/MIHAARU

Economic minister Mohamed Saeed stated that development is a certainty if the people of the Maldives elects president Abdulla Yameen for a second term.

Speaking at a ceremony held in reclaimed suburb Hulhumale on Monday to hand over 1,500 housing units developed by China Machinery Engineering Cooperation (CMEC), Saeed proclaimed that if the opposition triumphs in the presidential elections next year, all development projects would go in to disarray.

Minister Saeed also criticized the former presidents of the country, stating that they had failed to develop the nation.

Referring to former president Maumoon Abdul Gayoom, he declared that Maumoon had been unable to provide sufficient housing to the citizens of the Maldives during his 30-year tenure, and this does not suffice a reason for Yameen to be unable to do the same. He also said that the citizens will not forgive former president Mohamed Nasheed for his actions during his regime. Saeed additionally stated that the ideal career path for local tycoon and the leader of Jumhoory Party, Qasim Ibrahim, was in the field of business.

He also called on other opposition leaders to support and elect Yameen for a new term.