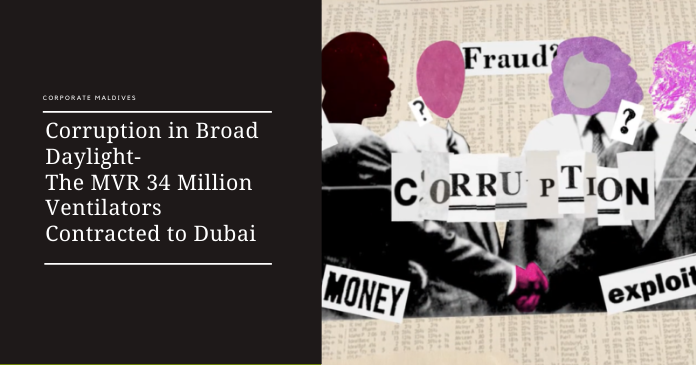 In the latest COVID-19 compliance audit report by Auditor General’s Office, several issues regarding the contact were revealed. This includes failure to assess Executers General Trading’s financial and technical capabilities before awarding the contract; failure to obtain performance and advance payment guarantees; and non-delivery of the ventilators to date. 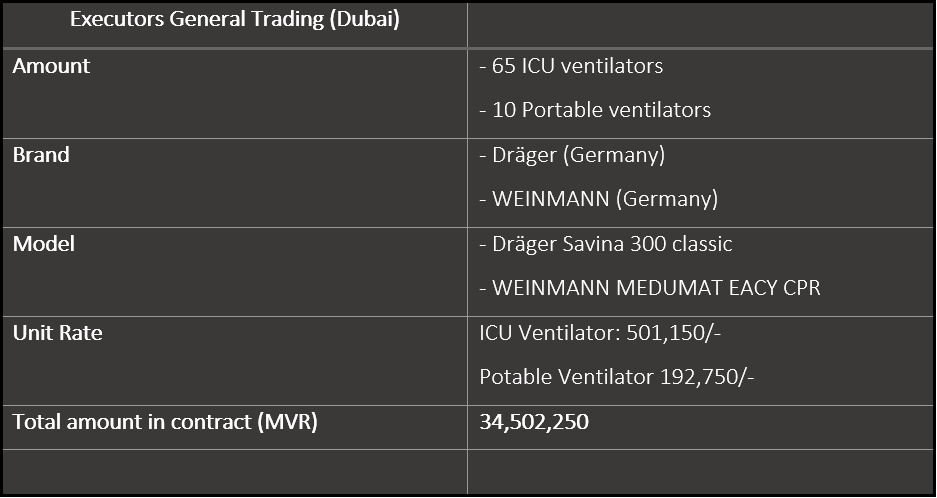 Further, Auditor General notes that Executor General Trading’s price for the ventilators is higher on comparative terms; procurement contracts of ventilators awarded to local parties worth MVR 21.4 million have not been awarded via competitive and fair bidding that befits to the circumstances; no proper inventory records have been maintained for procurement of personal protective equipment (PPEs) worth MVR 19.4 million from various suppliers; and lack of inventory records maintained for procurement of PPEs from STO PLC. via an advance fund of MVR 32.96 million maintained with the Company.

Previously, Minister of Health Abdulla Ameen and officials from the National Emergency Operations Center (NEOC) stated that the Executors General Trading was contracted at the recommendation of the World Health Organization (WHO). This has been declared by WHO as false information. According to the audit report, WHO did not engage in communications with Executors General Trading, and neither did it provide a list of companies which supply medical equipment. 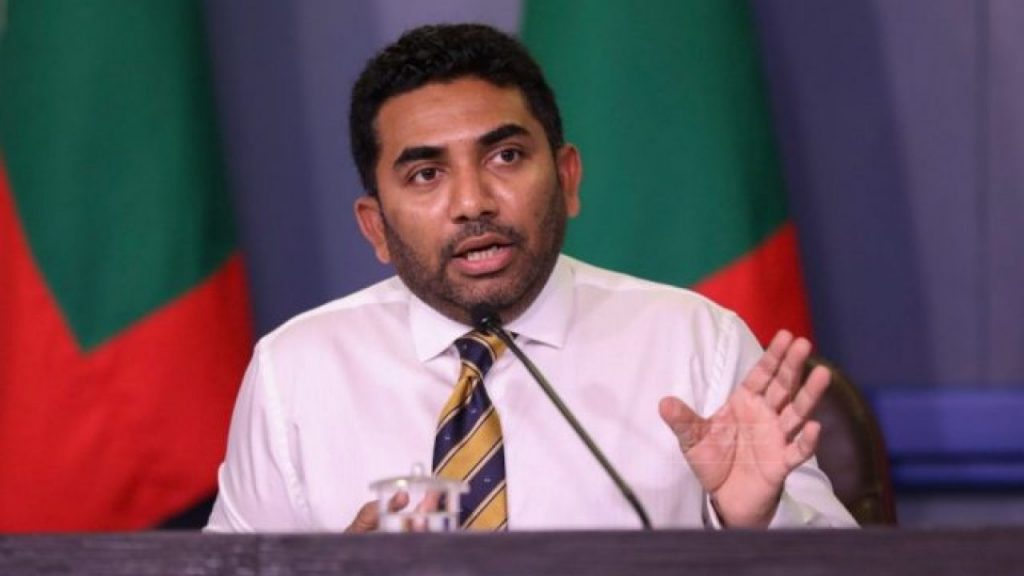 Moreover, STO Medical had offered to supply the ventilators, but at a higher price. STO is a state-owned company that has been operating in the Maldives for over 40 years. This situation could have been avoided if it was handed over to a company that the country is familiar with. “Procurement needs to be done professionally. Wire transfer should be done only after checking the credibility of suppliers,” said Ahmed Arif, Chairman of Senior International.

With the rise of this issue, several allegations were made by the public on Spokesperson of the National Emergency Operations Center, Mabrook Azeez. In May, when Mabrook was questioned about the ventilators, he claimed that the WHO country office in the Maldives communicated with the WHO office in UAE to procure ventilators. This raised several questions. Why did it take so long for WHO to declare that they did not recommend Executors General Trading?

According to the Anti-Corruption Commission (ACC), Executors General Trading is a registered establishment which holds a commercial license in Dubai, UAE. The report by ACC stated that Executors General Trading has been a member of the Dubai Chamber of Commerce since 1997. However, no information regarding the company is available online and the company does not have a social media presence. It could be suspicious that there is not easy access to the company’s information. In this generation, one can find that even pets have social media accounts!

What are the consequences of this negligence? The Health Ministry has already made 90% of the final payment with the permission of the Ministry of Finance without an advance payment guarantee. This means that if Executors General Trading fails to deliver the ventilators as per the agreement, it would be difficult to get the advance payment back. “We note that this has put the state at risk of great financial loss,” reads the report. The Minister of Health would receive the finance issued by Ministry of Finance. Hence, the involvement of both ministries needs to be noted in this situation.

Mabrook Azeez stated that he ensured the information he conveyed to the public was verified by the relevant ministries — even to extent of sharing contracted company names, payment details and delivery dates. “The auditor general’s latest report is an important step towards establishing accountability and transparency. All officials of the government should be held accountable irrespective of their position.”

Auditor General recommends relevant authorities to carry out investigations into the misrepresentation of information and non-compliances. MP for Kaashidhoo Constituency Abdullah Jabir called out to hold government accountable for its actions. He said that this is not a new thing. “Stealing has been going on since the beginning. The government has failed.”