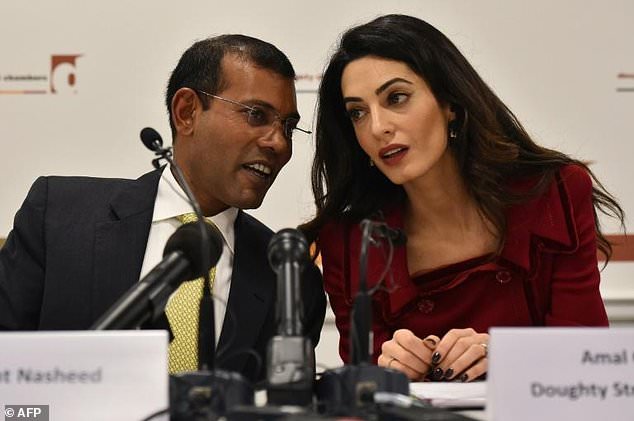 Human rights lawyer Amal Clooney Wednesday raised fresh fears for the safety of her client, former Maldives president Mohamed Nasheed, after an official vowed to have him arrested and deported.

The London-based lawyer said she was “very concerned” about remarks by Male’s ambassador-designate to Colombo, that he would have the exiled leader arrested if he set foot in Sri Lanka.

Clooney, who is married to Hollywood star George Clooney, had successfully petitioned a UN body which ruled in late 2015 that Nasheed was wrongfully convicted on a terrorism charge earlier that year and sentenced to 13 years in prison.

The UN Working Group on Arbitrary Detention also ordered the government of President Abdulla Yameen immediately to free Nasheed and pay him compensation, a demand rejected by the Maldives.

Nasheed travelled to London in January last year on prison leave for medical treatment and has since then remained in self-imposed exile. He travels frequently to Sri Lanka to meet fellow dissidents.

The new Maldivian envoy to Sri Lanka, Mohamed Hussain Shareef, told a local television station Monday that he would have Nasheed arrested in Colombo should he visit and would deport him.

“If a Maldivian authority requests me to detain and return Mohamed Nasheed back to the Maldives, I will,” Shareef said.

“It’s very simple. They have to say, this is an individual who we are seeking. I’ll even go out to the street myself and do it.”

Clooney said Nasheed should not be returned to the Maldives to serve his prison sentence.

“Any attempt by a Maldivian diplomat to detain President Nasheed in Sri Lanka would constitute a violation of international law as well as Sri Lankan criminal law,” she said according to a statement mailed to AFP by Nasheed’s party.

She also said Sri Lankan authorities must ensure that Nasheed’s rights were respected while he was in their country.

Her co-counsel Jared Genser said Shareef’s remarks were “as outrageous as they are in flagrant violation of international law”.

Nasheed’s Maldivian Democratic Party said they were not taking Shareef’s remarks lightly in view of the illegal arrest of a Maldivian national in Colombo in November 2015 and his deportation.

Sri Lanka’s foreign ministry had in 2015 warned the Maldivian envoy in Colombo that any similar action in future could seriously damage relations.

The Maldives has faced tough international criticism over the jailing in March 2015 of Nasheed, the first democratically elected president, following a rushed trial which the UN said was politically motivated.

Yameen, who came to power following a controversial run-off against Nasheed in November 2013 faces international censure over his crackdown on dissidents.