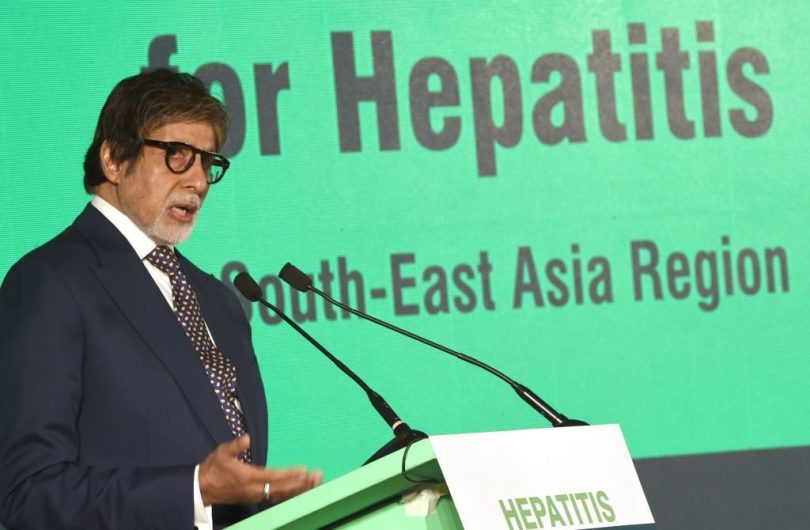 Indian Bollywood actor Amitabh Bachchan addresses an event in Mumbai on May 12, 2017, held to announce him as World Health Organization (WHO) goodwill ambassador for Hepatitis in South-East Asia. PHOTO/AFP

Bollywood megastar Amitabh Bachchan, who was to take part in the World Health Organisation (WHO)’s seventieth session of the Regional Committee for South-East Asia in the Maldives, cancelled his trip at the last minute.

The regional committee meeting commenced Wednesday in Paradise Island Resort and will go on for four days. The Bollywood legend, who is WHO’s Goodwill Ambassador for Hepatitis in the South-East Asia Region, was scheduled to arrive in the Maldives on Thursday afternoon.

A government official confirmed to Mihaaru that Bachchan called off his visit in the eleventh hour but did not provide a reason for the abrupt cancellation.

However, Mihaaru understands that the Ministry of Health has informed Paradise Island Resort that Bachchan’s hasty decision stemmed from health problems. His resort booking for the trip has also been cancelled.

The sudden announcement of Bachchan’s cancelled visit comes in the wake of a social media campaign spearheaded by the opposition lawmaker of Galolhu South constituency, Ahmed Mahloof, urging the celebrity actor to boycott his trip to the Maldives.

In a series of tweets, MP Mahloof had tagged the Indian superstar, saying, “… our leaders are jailed. We are deprived of our constitutional rights & freedom. Please boycott your trip to #Maldives”.

A number of other Twitter users had soon jumped on the bandwagon, requesting Bachchan to call off his visit.

MP Mahloof thanked the actor for “listening to our call in cancelling your trip” in another tweet early Thursday.

Apart from Bachchan, the Indian health minister has also called off his participation in the WHO meeting in the Maldives, sending a ministry official in his stead. The opposition had also campaigned on social media, urging the minister to boycott the trip.

The opposition is claiming credit for the health minister’s decision to cancel the trip.