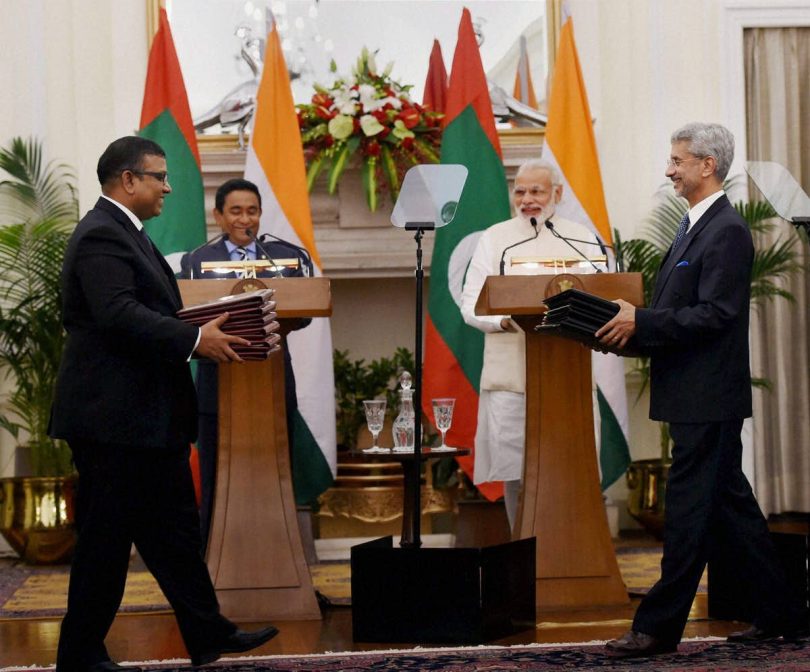 After upsetting news for the Indian foreign policy establishment from Sri Lanka (99-year-long lease of Hambantota port to China) and Nepal (China-leaning Left alliance poised to form government after winning elections), there is yet another blow to South Block (India’s power corridors) from its neighbour and SAARC member, Maldives. The Indian Ocean nation, comprising 1,192 islands, with a total area of 298 square kilometers, and having a population of just a little over four lakh, has poked India in the eye.

The latest provocation from this tiny country has put India’s Maldives policymakers in a spot. On 13 December, three councillors of Gaafu Alifu, all belonging to the main opposition party MDP (Maldivian Democratic Party), were suspended for meeting India’s ambassador to Maldives, Akhilesh Mishra, days after authorities banned local officials from hosting foreign diplomats without prior consent.

The suspended councillors are Ahmed Fuad, Ahmed Nazmeen and Hussein Adam. They will remain suspended for three months without pay, and the council secretariat has been asked to deny them access to council premises and documents during this period.

The suspended members have cried foul and denied meeting the Indian envoy after the Local Government Authority (LGA) had issued a circular, banning the councillors’ meetings with foreign diplomats without prior approval from the home ministry. They have maintained that they got a copy of the LGA circular half an hour after their dinner meeting with the Indian envoy.

Incidentally, Mishra, who normally uploads photographs of all his meetings on the social media, did not upload photos of this particular meeting until two days later, on the evening of 15 December. India is yet to come up with a reaction to this Maldivian affront.

This is despite the fact that four countries – the United States, Australia, the United Kingdom and Germany – promptly criticised the latest move from the government of President Yameen Abdul Gayoom (better known as YAG), and their ambassadors came up with hard-hitting tweets. Sample the tweets of these four ambassadors of the developed world below.

The timing of this draconian democracy-muzzling move from the YAG government is interesting. It comes close on the heels of YAG government signing Maldives’ first-ever Free Trade Agreement (FTA) with China, and President Yameen’s just-concluded state visit to China, where Chinese President Xi Jinping extolled the Maldives-China FTA.

Incidentally, Maldives was supposed to sign its first-ever FTA with India, which hasn’t happened. The Maldives-China FTA took India by surprise, which shows how Maldives has been cocking a snook at India for quite some time, given the fact that the China-Maldives FTA was signed in September, and the Maldivian parliament, known as the Majlis, had approved the 1,000-page document in a matter of minutes last week.

The Indian reaction to the Maldives-China FTA, as postulated by Ministry of External Affairs spokesman Raveesh Kumar in his 14 December briefing, is as follows:

On Maldives signing the FTA with China, we have actually seen reports about Maldives-China Free Trade Agreement. The reports have also alluded to the manner in which the FTA was passed by the Majlis. We are actually yet to see the full document, and hence, it may not be appropriate for me to comment on the contents. As you are aware, India attaches the highest importance to its relations with Maldives. Our two countries have strong historical and civilisational linkages, and also at the people to people level. We are also committed to support democracy, development and stability in Maldives. It is our expectation that as a close and friendly neighbor, Maldives will be sensitive to our concerns in keeping with its India First policy.

Ironically, while India is harping on the need for Maldives to follow its “India First” policy, the YAG government of Maldives has been practicing “China First” policy. I have earlier covered this particular topic extensively here.

The latest affront from Maldives to India triggers several questions.

How will India tackle the ever-increasing intransigence of the Maldivian government? Will India wake up from its self-enforced slumber, now that it has been amply demonstrated that India’s Maldives policy has been a disaster?

Maldives is the only South Asian country that hasn’t been visited by PM Narendra Modi, ever since he abruptly cancelled his scheduled visit to that country in March 2015, after YAG government had arrested former Maldivian President Mohamed Nasheed, who had been on friendly terms with India, on charges of sedition. 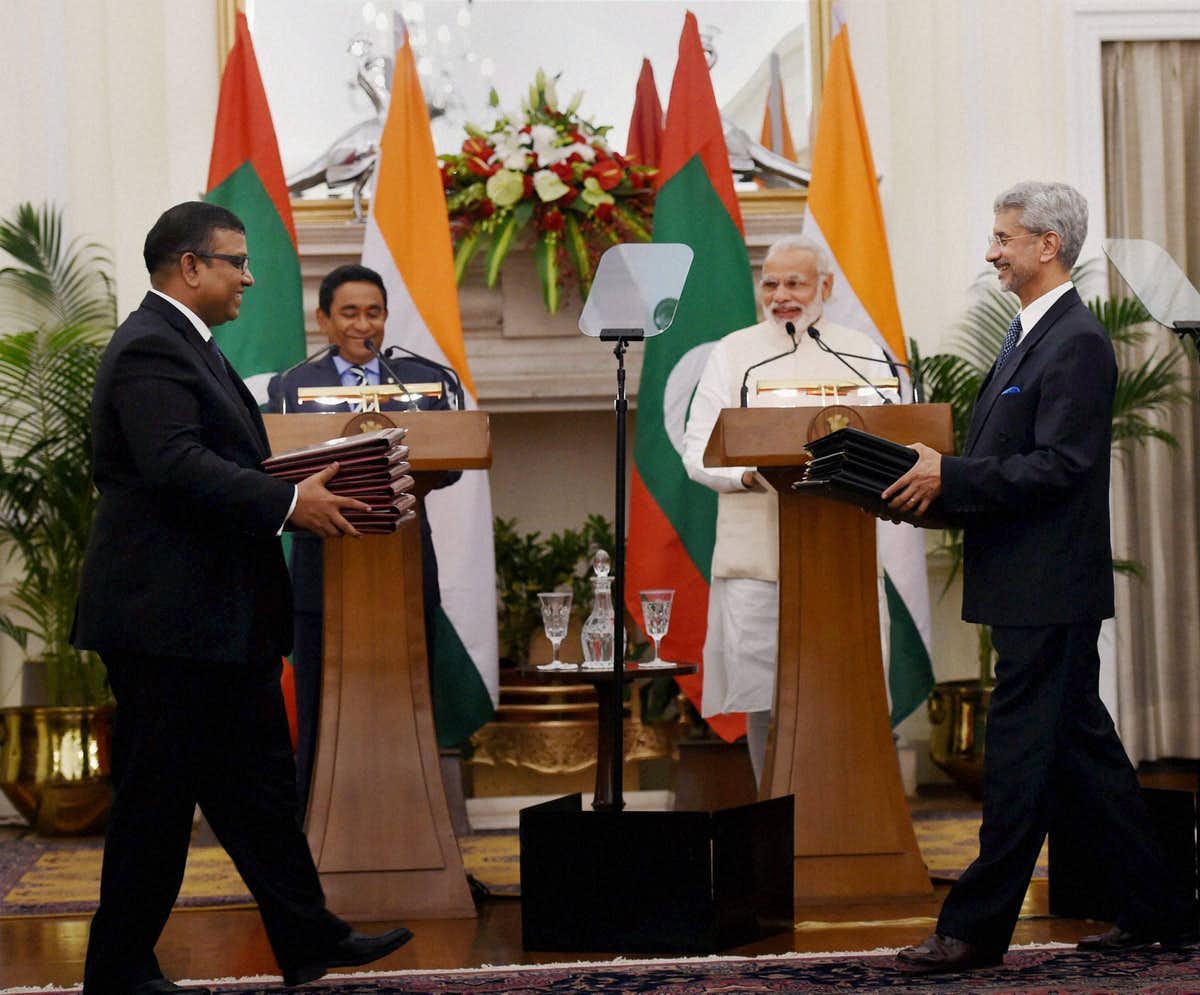 Will India Have a Hard Talk With President Yameen?

Will India have a hard talk with President Yameen to amend the situation diplomatically? Or will India try out harder options like regime change in Maldives?

India still enjoys tremendous clout in Maldives, and is eminently capable of enforcing regime change covertly, although, this extreme option has never been tried by New Delhi. Will the latest Maldivian affront prove to be the last straw for New Delhi?

Will India Finally Come up With Open Support for Nasheed?

Will India finally come up with open support for Nasheed, supreme leader of Maldives’ biggest opposition party, the MDP? In August 2017, Nasheed had been invited for a MEA-sponsored event, which evidently riled the Yameen government to no end and promoted Maldives’ slide into the Chinese orbit, resulting in the Maldives-China FTA a month after that.

But since then, India has been silent and inactive, and not played its Nasheed card any further, much like a confused suitor making overtures to his lady love, but falling short of proposing marriage. Will India finally get rid of its confusion and bat for Nasheed at the expense of Yameen? 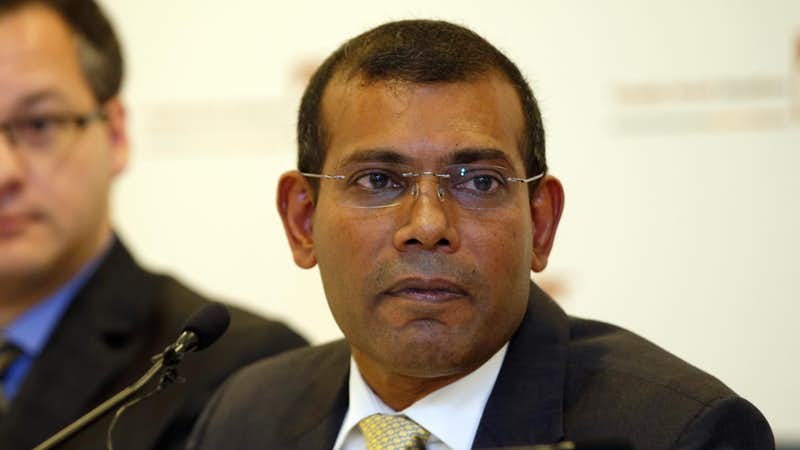 Well, the chances of India’s firm response to Maldives don’t seem to be on the radar screens yet. But it’s a pity seeing a country of 1.25 billion people being subjected to this kind of treatment by a country of just four lakh people. What the Maldivian government is doing may be nothing more than a political harakiri, but the diplomatic graph of India is going down by such provocations, even more so when these provocations go unresponded.