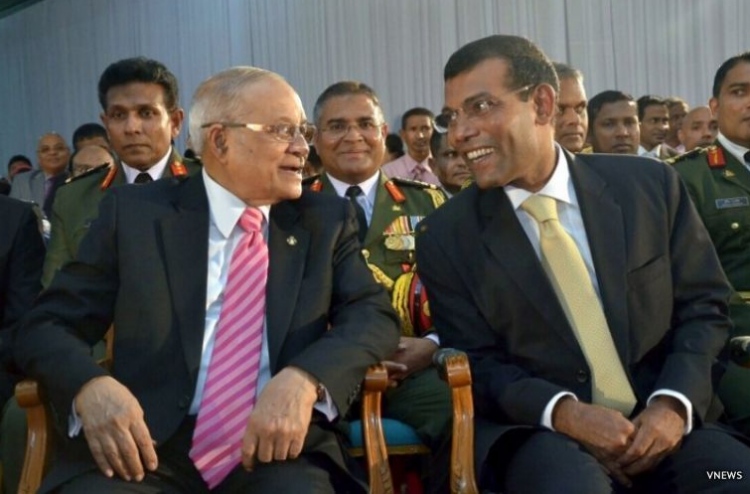 The original Dhivehi article was published on Mihaaru.com website on 23rd October 2017.

Without doing much calculation one thing is certain; when parties compete separately, there isn’t yet a candidate to win the election in one round. It was also the result visible from the recent past elections. So for the forthcoming next year’s election, the ‘fail-safe formula’ is to make a coalition. Since the new Constitution, this was how 2 elections were won.

The opposition is once again on course with this formula. All the attempts to overthrow President Yameen prior to the next election has repeatedly failed. Instead, he reinforced his power in each and every corner and closed all the pathways that might have lead to his removal from power.

According to President Nasheed, the only way the country can become stabilised at this juncture is, by establishing a transitional government. That government will be run by the leader that represents the parties. That leader’s responsibility will be to detach the powers that have been mixed up now and to reform the parliament, independent institutions and the judiciary. Finally, to make way for an independent and fair election. 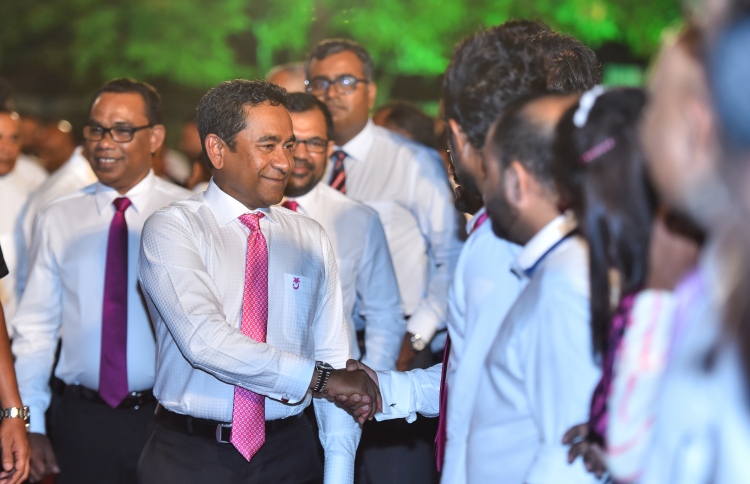 President Yameen at a rally

With this thinking, President Nasheed has passed on to the coalition parties which includes President Maumoon Abdul Gayoom to find a way. The parties had even begun discussions on it. However, the questions that are raised on the subject matter is no less:

The senior officials of the parties say that it is too early to answer all these questions. The first thing to do is to discuss and strategise a plan. After coming to an agreement, it can then be revealed to the general public.

Who will become the interim leader?

The talk of a transitional government came up while President Yameen and PPM party senior members had been criticising and saying that when it’s time to face the election, ‘the rock’ (the coalition) on which all the opposition are standing, will shatter into pieces, eventually.

The next reality is; all opposition leaders who want to contest in the election are stuck in a prison sentence. According to the Constitution, their current situation doesn’t allow them to compete in the presidential election.

When MDP’s assumed candidate Mohamed Nasheed has a 13-year jail sentence, Adhaalath Party’s Leader Sheikh Imran Abdullah has 12-year prison sentence hanging over their heads. Jumhooree Party’s Leader Gasim Ibrahim has a 3-year prison sentence and since ex-President Maumoon Abdul Gayoom is past 65 years, he also cannot contend in the election. Apart from them, the rest of senior members of the parties, who are also parliament members and involved in political activities, are facing trials in the court. 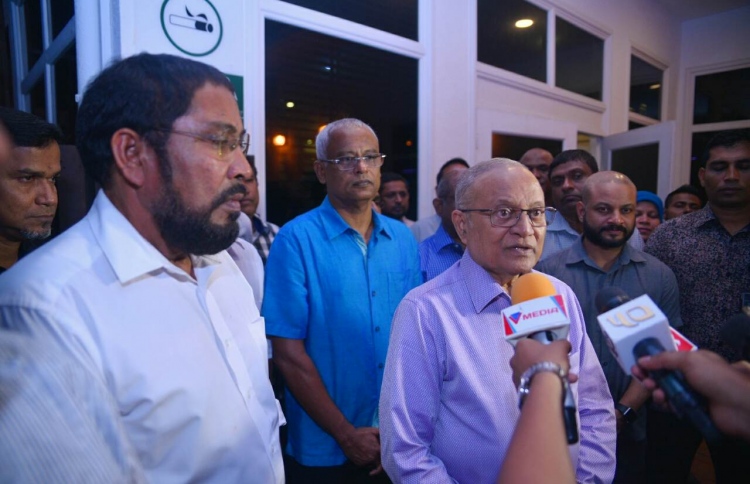 That’s where it becomes difficult to find a leader whom the public will accept. When all the parties want to contest, will any party let go to another party?

The Spokesperson of Maldives United Opposition (MUO), Galolhu-South constituency Ahmed Mahloof believes that Nasheed is not implying to give a chance to him or to Gasim. On the contrary, he is calling to hold discussions to move on to a transitional government with an interim leader and then to proceed on to the election.

According to Mahloof, the candidate need not be too political. The discussions among the parties will be held in order to select a candidate that all party leaders and members agree upon, a person who works sincerely and a person who worked dedicatedly for the country.

Mahloof said whoever the opposition selects, they have the full confidence that that person can defeat President Yameen. That is because President Yameen doesn’t have the support of the citizens and the past elections had proved that.

As per what Nasheed’s suggestion, amongst the candidates the parties nominated, the final candidate will be elected from the voter’s list. He has even suggested 2 methods of drawing votes from the list; one was that a selection of party members to vote for the list or to open the list for the whole country.

Does the law prevent a transitional government?

From the point of a transitional government, there are 2 different reasonings. Some believe that a provisional government or circumstance does not exist in the Constitution. Therefore, it cannot happen.

Then there are others who oppose this notion. The Constitution doesn’t prevent a coalition or to propose a candidate amongst parties or to rule. Those that support this thinking, believe that the candidate who gets elected from the voting list, during the presidential election the ballot will show the party of the candidate belongs to. The parties involved must agree to vote for the candidate.

President Nasheed and President Yameen also came to power, similarly, through such a coalition. Therefore, the opposition does not see why it is not possible again in the next election.

All talk, but one purpose

PPM Parliamentary Group Leader Ahmed Nihan feels that to nominate one candidate and forming a provisional government, are just hot-air.

‘They are just trying to achieve some things that Nasheed desires,’ Nihan said.

As proof he said in 2008 to defeat President Maumoon, they did ‘for a change’ coalition and to call for an election in mid-term was agreed but failed to do so. 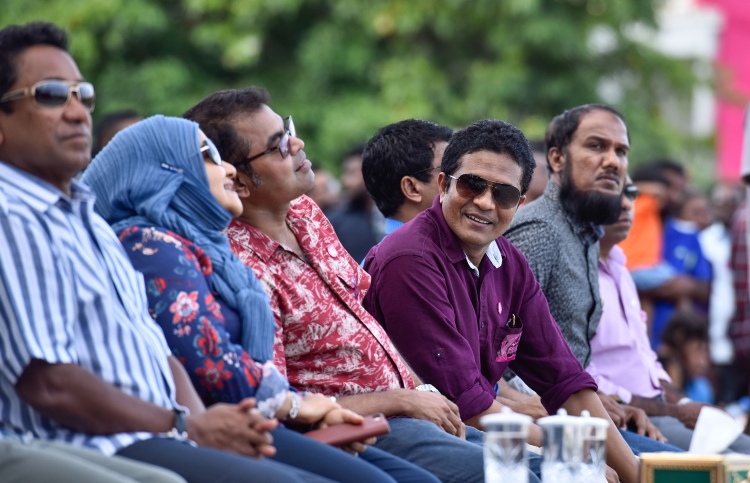 Nihan said as per Constitution of the Maldives, Nasheed himself will know that a person serving a 13-year prison sentence cannot under any condition be able to contest in a presidential election. In 2008 election, Nasheed was only able to contest under the new Constitution, when Maumoon was also made eligible to contend in it.

‘It is clear that this time he can’t contest. Nasheed also knows that he can’t make such a deal with the current government. Therefore, he will attempt to elect some he approves and convince MDP to approve his choice of candidate. Maldivians are very well aware of his such tactics,’ said Nihan.

He also agrees it is acceptable to nominate a candidate from among the parties, but added that the Maldives law doesn’t allow for a provisional government.

He said that the Maldives Constitution doesn’t allow for a first false election and then to hold another election to select the candidate who will become the leader. When the Constitution specifically stipulates the order of the electoral procedure, the law won’t allow changing that as one pleases.

He also said when they are talking about a single candidate, there is no one in the opposition parties to let go to another. He believes that they are all under one coalition because each of them are protecting their own selfish pursuits.

‘There is no one amongst them with similar thinking that can challenge the ongoing work by President Yameen to develop the country and the projects undertaken to heal the economy. Anyone can contend in the presidential election. But they can’t nominate a candidate who can defeat President Yameen,’ Nihan said.

The opposition says that what happened in the MDP administration, need not repeat in the future. When the interim leader detaches the power, reforms the institutions and resigns, it will open a door for a new election. Therefore, based on past experience, what is required is a leadership that means well for the country, said the opposition.