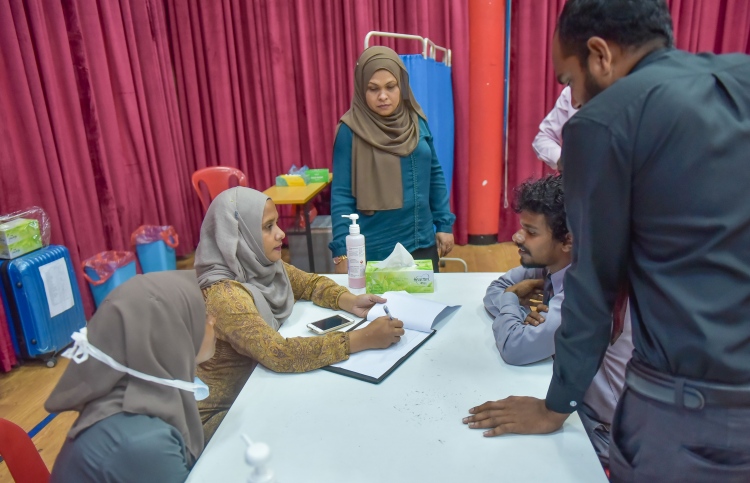 The original Dhivehi article was published on Mihaaru.com website on 7th May 2017.
The following is a loose translation:

If looked at it in any angle, the overnight suspension of Aasandha (universal health insurance scheme of the Maldives, managed in partnership with Allied Insurance Company) from private medical providers is beyond bewildering. Especially when the decision was done hastily last night around 11:30 pm, after sending out circulars to private medical providers. It was obvious that the government was unable to stomach something.

When the opposition won 3 city councils in the Local Council election, and when other council districts lean towards the opposition got confirmed, Aasandha company‘s sudden decision if considered a ‘coincidence’, surely looks like a joke.

The decision to curtail Aasandha health insurance scheme was claimed to be made by the government policy-making board. So does that board’s decision has to come when the government started to feel defeat in the local councils’ election?

Do they have to make this dreadful decision of suspending citizen’s health insurance scheme through the private medical providers while the election vote count results were being announced? Or even if the board’s decision was previously taken, should it be implemented late at night when everyone has gone to sleep? Or on a public holiday? Isn’t this suppose to be a decision done systematically after discussing with the private medical providers, and after informing the public?

While not considering any of the above and without holding any discussions, this comes as nothing but a huge shock to the whole nation. There is only one way to interpret this move by Aasandha company; that after local elections results started weighing towards the opposition; a revenge attack on the public. A mere steam release. Or there is no other way this should coincide with the election result announcement.

…. this move by Aasandha company was not done sensibly. They didn’t consider and respect the citizen’s who were relying on the health insurance scheme.

Many ruling party officials criticized in many forums about the usage of the state funds to provide free health insurance scheme. During the campaign and also even after coming to power they had criticized the program. However, since the previous government administration established a good governing mechanism for the health insurance scheme and also due to the fear of losing public’s support if the scheme is dissolved, President Abdulla Yameen Abdul Gayoom’s government continued it. Instead, during President Yameen’s campaign program, he vowed to introduce a new scheme under the name ‘Unlimited Aasandha’ in order to expand it further. After taking the office the Unlimited Aasandha was introduced and the state-funded health insurance system was extended. Many also benefitted from this new scheme.

If the government pleases they can cut private medical providers from providing services under the health insurance scheme. If there is a huge expenditure, an expense controlling system should also be introduced. However, this move by Aasandha company was not done in the proper manner. They didn’t consider and respect the citizen’s who were relying on the health insurance scheme. Instead, we saw a scene of vengeance and a message showing that anything can be done.

On the other hand when private medical providers gets delisted, all the demand (and pressure) now falls onto Maldives’ biggest hospital – Indira Gandhi Memorial Hospital (IGMH). Apart from ADK hospital, the next best and extensive medical provider is IGMH. People seeking health service from IGMH keeps increasing, yet it’s been days since the problems faced by the hospital’s services has been raised. That is the reason why the hospital’s current and previous seniors stress on building another hospital providing similar level of service. Still, when the private health providers get delisted the whole country would rely on IGMH and the government should be aware of the huge difficulty that would come from that as a result. Islanders have to travel to Malé and join the long queue at IGMH to get an appointment. The culture of begging is reinstated.The citizen in the end has to endure more suffering than before.

Once private medical providers are delisted, citizens who have to spend more and go overseas (neighbouring countries like India and Sri Lanka) to seek medical treatment that is not available in the Maldives also has to suffer as they cannot use Aasandha through the foreign medical institutes. Again the public has to struggle and again citizens have to beseech from the affluent for financial assistance to go abroad for medical treatment which are not available in their homeland. The old way is restored, we are back to square one. This should not have happened this abruptly, without a systematic plan.

If the private health providers were delisted under an organized plan, the government should have had a solution to the latter problem. It need not be done this impulsively.

If they take such extreme revenge attacks in connection with an election result, imagine what would happen to the country next.