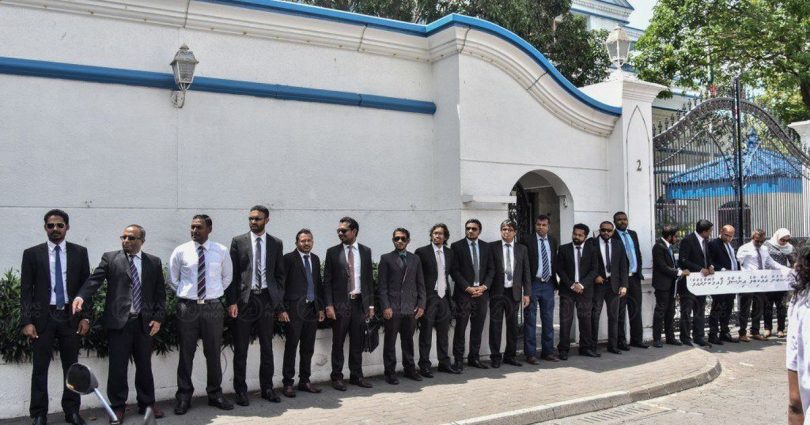 It was one of biggest efforts at legal reform in the Maldives in recent years. On August 30, More than 20 lawyers, including a former attorney general, former solicitor general and former deputy prosecutor general, gathered outside the Supreme Court in the island country’s capital, Male. They had with them a 14-point petition endorsed by 56 lawyers outlining concerns about the deteriorating state of the judiciary in the country.

There had been multiple recent instances of corruption, constitutional overreach, intimidation of lawyers and judges and contravention of rights of those on trial, the lawyers told the media gathered outside the court premises. The Judicial Service Commission, the country’s judicial watchdog, had done little to counter or condemn the rampant politicisation in the judiciary, they said. This was especially visible when members of the political opposition were tried: hearings were conducted over consecutive days and the verdict was often issued at midnight, a practice, that “cannot be accepted by any means”, lawyers said.

“The Judges must show it from both their words and actions that more than the need to remain in their posts, the priority should be given in abiding by the rules and adhering to them,” the petition read.

Predictably, the petition wasn’t accepted. But more shockingly, on September 10, the Department of Judicial Administration – controlled by the Supreme Court – suspended all signatories, which together reportedly make up a third of all practicing lawyers in the Maldives, over charges of contempt and for gathering in a manner that “obstructs the independence of justice system”, without explaining how. The announcement was made over a tweet (short of midnight, this time) at 11.08 pm.

A number of Lawyers have been suspended.
ReadMore: https://t.co/A45LQmDePf pic.twitter.com/K47PSaFHVO

A study carried out by the United Nations Development in 2014 revealed that 71% of Maldivians prefer to settle disputes out of court mainly due to lack of confidence in the justice system. The trust deficit, however, goes back several years. Before the Maldives transitioned to democracy in 2008, its dictator-President Maumoon Abdul Gayoom (who had been in power since 1978) had populated the judiciary with his loyalists. When the first democratically elected government was formed, the newly adopted constitution had scheduled for the periodic reappointment of judges based on merit. But the Judicial Service Commission, which had as among its members some of Gayoom’s loyalists, later dismissed the constitutional provision as “symbolic” and in 2010, allowed them to be sworn in on a lifetime basis.

Three years later, when presidential elections were held in the Maldives the Supreme Court stalled the process three times, on largely spurious grounds. For instance, it cancelled the results of the first round of voting in October that year, where Mohamed Nasheed, the first democratically elected president of the Maldives, who had resigned the previous year, was leading but fell short of the required 50% of the votes. After the re-run of the first round yielded similar results, the court postponed the second round.

This was a “subversion of democratic processes”, observed the United Nations Commissioner for Human Rights, but it seemed to have its intended effect. Gayoom’s half-brother Abdulla Yameen was elected as the President of the Maldives. (Earlier this year, the two had a bitter fallout after a power struggle in the ruling party and Gayoom was eventually thrown out and Yameen appointed himself as the party chief.)

Under President Yameen’s aegis, the Supreme Court, through a series of rulings, granted itself several extra-constitutional powers. By appointing itself as the head of the Department of Judicial Administration in 2014 and seizing the regulatory authority of the attorney general’s office last year, it granted itself powers to transfer, appoint, certify and dismiss judges and lawyers. In May, it declared itself the final authority to determine the validity of no-confidence votes passed in the Parliament.

In July, as the ruling party was set to lose its Parliamentary majority as its members were on the brink of switching over to the opposite camp, led by Nasheed and Gayoom, who had struck an agreement to unseat Yameen, the Supreme Court ruled that MPs would lose seats in case they quit, switched sides or were expelled from the political parties they were a part of. Each of these measures ended up consolidating the position of the president: insulating him from criticism, criminal investigation, prosecution and impeachment.

The petition came on the back of these and several other decisions that pointed to the increasing politicisation of the judiciary under Yameen.

In it, the lawyers also criticised the courts for their flagrant disregard of due processes, allowing anonymous witnesses and secret intelligence reports as evidence during the trials of members of political opposition. Last year, retired Kenyan Chief Justice Willy Mutunga, an envoy of Commonwealth secretary general, had observed that such long-term detention of the opposition figures “eroded the government and the judiciary’s legitimacy”.

In his review, Dr Mutunga recommended a “root and branch judicial reform”. In its response, the Maldives exited the Commonwealth group.

“We knew they wouldn’t accept it,” said Hussain Shameem, former deputy prosecutor general who was closely involved in drafting the petition. Their effort was part of a larger plan: to kick-start a series of awareness workshops, TV appearances and mount pressure on the judiciary to initiate reforms, through the civil society and diplomatic channels, starting with a photo-op outside the Supreme Court.

The group, said Shameem, had also prepared a welfare fund to help the suspended lawyers with their monthly rents.

Until a few months ago, the criticism of the judiciary came mostly from the Nasheed-led political opposition and international watchdogs. But over the past couple of months, the crackdown against the opposition widened to include tourism tycoon Gasim Ibrahim, leader of the country’s third-biggest Jumhooree Party and Gayoom’s son Faris, on bribery allegations (in separate cases).

On September 10, Husno Al-Suood, former attorney general, marched to his successor’s office with a copy of the Maldivian constitution printed on large A3-sized papers. “We’ve come to note that some lawyers miss certain clauses in the constitution,” he told the gathered mediapersons, “so with a bigger [sized] constitution, we hope they won’t miss them out.”

“It must’ve angered them,” chuckled Shameem. That was the night each of the lawyers submitting the petition for judicial reform – including Suood – was suspended.

The Supreme Court has since offered to return the licences, if the suspended lawyers issue an apology. While most signatories of the petition seem to hold firm for now, some privately admit that a few of their clients aren’t taking it too well. Most of the suspended lawyers represent those being politically persecuted, including Mohamed Nasheed, Gasim Ibrahim, former defense minister Mohamed Nazim, leader of the Islamist outfit Shaikh Imran and 16 MPs who fell out of favour with the ruling party and were either stripped of their seats or prosecuted.

Lawyer Ali Zahir, who represents Shaikh Imran and Mohamed Nazim, said that the suspension had barred him from even contacting his clients, currently under house arrest. Given the limited number of skilled professionals in the island-state, it also left the two little talent to choose from. “Nearly 80% of the private lawyers actively practicing in criminal courts now stand suspended,” Zahir said.

“There is simply no legal basis for this,” he added. “The government and the judiciary is acting as one body.”