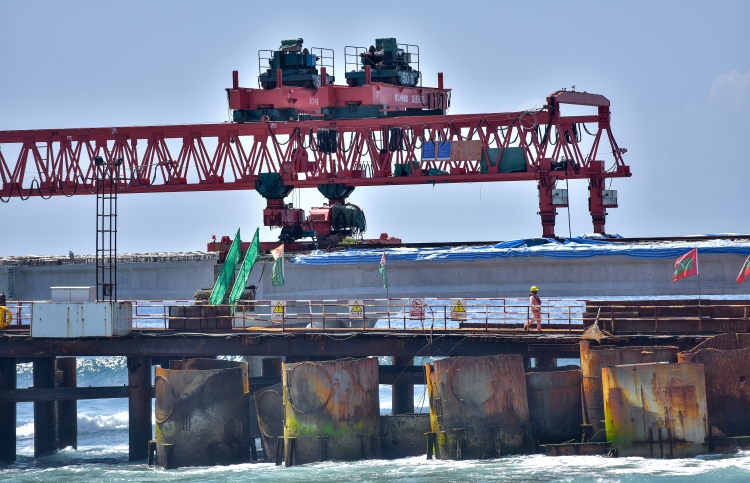 I-beams are placed at the approach bridge on the Male end of the China-Maldives Friendship Bridge PHOTO: NISHAN ALI/MIHAARU

The Chinese contractor for the landmark bridge, being developed between capital Male and airport island Hulhule, announced that 67 percent of the development is complete.

In a news conference held at CCCC Second Harbour Engineering Company’s office complex, the Executive Manager of the project, Lin, proclaimed that construction of the main pillars of the bridge is complete.

Lin added that the I-beams required for the superstructure are nearly complete. Work on the tallest three pillars placed at the centre of the overwater bridge is also nearing completion, and are scheduled to be completed in late November.

In the news conference, he assured that the development of the bridge was “under control” and progressing smoothly.

Lin explained that once the beams are completed, the deck will be placed and the superstructures, which are being built in China, will be bought and assembled. Work is also underway for the construction of the box girders required for the bridge which will also be brought to Male’ by late January.

Staff of CCCC Second Harbour Engineering Company at work on the site of the Male-Hulhule bridge. PHOTO/MIHAARU

He highlighted that development of the bridge was proceeding as agreed between the two countries and assured that CCCC will complete the development ahead of schedule.

While the agreement states that the bridge must be completed by the end of September 2018, the government has declared that the project can be finished by July that year.

With the nearing completion of the project, Lin also shed light on the ongoing link road project, that is to be constructed to connect the bridge from Hulhule with reclaimed suburb Hulhumale. According to Lin, discussions are being held on how to manage traffic flow so that jams can be avoided.

The total expense of the project amounts to USD 200 million, out of which USD 116 million is provided as free aid by the Chinese government. China has also loaned USD 72 million while the Maldives’ government is bearing USD 12 million of the project.

A tour of the China-Maldives Friendship Bridge to shed light on the project’s progress was cancelled due to weather restrictions earlier this week and it is to be rescheduled.