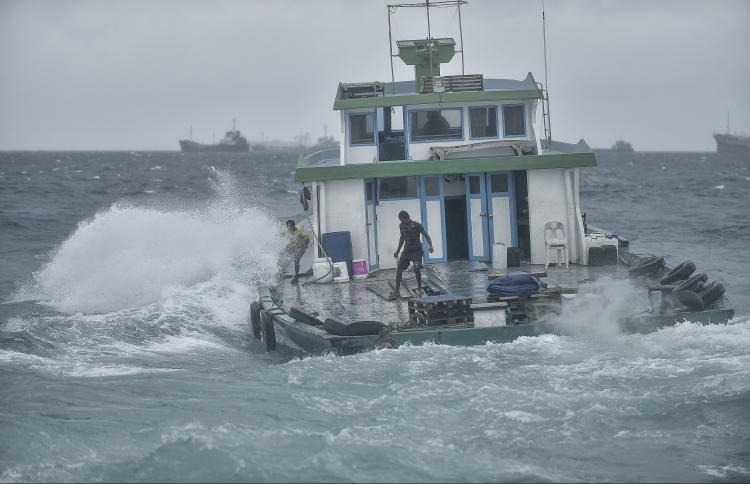 A local boat travels out of the Male harbour in rough seas. PHOTO: NISHAN ALI/MIHAARU

The Maldives Meteorological Centre (MET) on Thursday warned of torrential downpours and strong winds in the Maldives from the current deep depression off the coast of neighbouring Sri Lanka.

MET’s director Ahmed Rasheed stated that all regions of the country will experience rough weather but the worst storms are expected to hit northern and central Maldives. He estimated that most of the bad weather will clear up after Friday with some rain expected to fall in various regions.

In a statement MET released earlier, the centre warned that the tropical cyclone off the Sri Lankan coast is slowly moving northwest, close to the Maldives. MET forecasted thunder storms, heavy rains, strong winds and rough seas over the next 12 hours, and cautioned travellers to take safety precautions.

Meanwhile, Sri Lanka’s Disaster Management Centre (DMC) has issued a Red Alert in the country. The Sri Lankan government has announced that the storms have left at least four people dead while over 20 are missing.

The Maldivian Embassy in Sri Lankan also told Mihaaru on Thursday that areas where several Maldivians reside in the nation’s capital of Colombo have been severely affected, with the strong winds throwing off roofs of houses and felling trees. However, the embassy assured that it has not received news of any injuries or casualties among Maldivians yet.