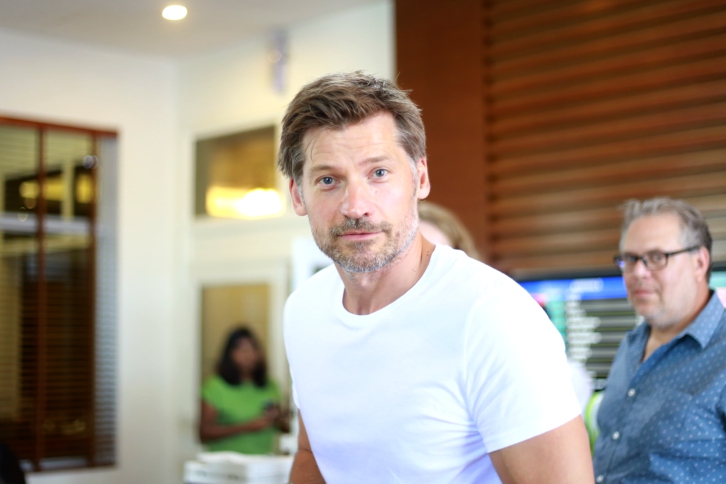 Last week, the news of Game of Thrones star Nikolaj Coster-Waldau being in the Maldives had a large proportion of the population who religiously follow the show buzzing about his presence in the country.

Whilst the general atmosphere in the Maldives during the week was reminiscent of when we found out that a part ‘Rogue One: A Star Wars Story’ was being filmed in our very own Laamu atoll, Waldau’s trip to the Maldives was purely in his capacity as UNDP’s Goodwill Ambassador.

The star had helped the Maldives kick-off its climate action journey, and spread the message that the Maldives cannot achieve United Nation’s Sustainable Development Goals (SDGs) without safeguarding the country’s environment first.

“I am very interested in the world we live in, it goes hand-in-hand with being an actor. And as human beings, it’s very interesting to know why we do the things we do,” the actor said about his role as UN’s Goodwill Ambassador so far. “I work at this television show and I get a lot of attention – I want to give this attention to UNDP and what they do.”

“We’ve been successful at some things, but we’ve also been pretty stupid,” he continued. “The way we’ve been living on this planet is not sustainable, and we’ve reached the point now where we have to make some changes.”

As UNDP’s Goodwill Ambassador, Waldau mainly focuses on promoting Climate Change and Gender Equality, out of the seventeen SDGs.

When asked why he was particularly passionate about these two causes, he said that he had two teenage daughters and that he wanted them to experience the same rights and privileges as men do, adding that “it’s a proven fact that when women are in power, countries flourish.”

Waldau also spoke about how the situation in the Maldives resonated with him personally because he was able to identify similarities between the Maldives and his wife’s home, Greenland: “they both have small populations, the geographical areas are small, and you have small settlements. It was interesting to see the similarities.”

During his trip, he had visited several UNDP project sights working on climate-related issues – primarily in the islands of Maabaidhoo and Maamendhoo in Laamu Atoll. In Maabaidhoo, he got a tour of the island, mainly focusing on the island’s beach erosion, storm surges and tides that impact the local’s livelihoods. He had also observed the island’s wetland ecosystem, which has been used as a waste dumping site by the locals for over 40 years. This has resulted in severe degradation and loss of biodiversity, and also affected the public health of the people.

“There is a lot of garbage – and it cannot be easy because [Maldives] is so scattered out. And I see the frustration when you get everything in order in an island and you do the right thing and segregate the waste properly – but then you still can’t get rid of the plastic,” Waldau said about the wetlands he had seen in Laamu atoll, and the efforts that go in to proper waste management.

“UNDP came up with this project where they cleaned up and restored the mangroves. What this will do, in terms of climate change, is that it will absorb the rainwater, and when flash floods occur, this will help. [The mangroves] were there before too, and you want to go back to how it was before when it was natural – because that worked best.”

Waldau had also met with several locals, including fishermen, boat builders and people who had been displaced due to severe island erosion. He had also met students of Maamendhoo and learnt about the student-initiated ‘Green Hall’ project, which focuses on finding local, innovative solutions to address climate change, food security and water conservation in a small island with limited space.

“You have so many islands, you’re spread out on a huge geographical area, and the challenges are very real. But you’re also a very young country – there are so many young people, and the ones I’ve met were very smart, very well-spoken and very inspiring.”

Nikolaj Coster-Waldau speaking to the press at the VIP lounge in Velana International Airport in Maldives. PHOTO: FARAH AHMED/MIHAARU

Naturally, when anyone visits Maldives for the first time, we are curious to know what they think of our coral reefs that are unapologetically advertised to the tourists. However, the topic had brought up an even more imminent vulnerability that the Maldives is facing, which is coral bleaching.

“I went snorkelling, and unfortunately, we only saw little bits of corals that were alive. I saw a lot of white, bleached corals. And we don’t know what effects this will have in the future – but we know it’s bad. It’s difficult to just lower the temperature of the seas. But there are other things we can do – there are NGOs that are replanting corals, and perhaps, not dumping more waste on the coral reefs might help.”

“It’s never just one thing,” Waldau elaborated. “You also have waste management as a serious issue here. And most tourists who come to the Maldives will not see that. They go to resorts and that’s just ‘paradise’ – but obviously, your reality is different.”

The star who plays the infamous character Jaime Lannister on the famous show urged Maldivian citizens “to get engaged.” He noted how climate change, and impacts of climate change are things that are generally accepted here, despite it being the “big unknown” from all of UN’s SDGs.

“I think you are part of a younger generation, and clearly, there’s a different attitude and a willingness to be engaged. So, take action. Get engaged in your local community, and take action together. It doesn’t have to be life changing or life altering. But if everyone does a little bit, you can make a huge impact.”