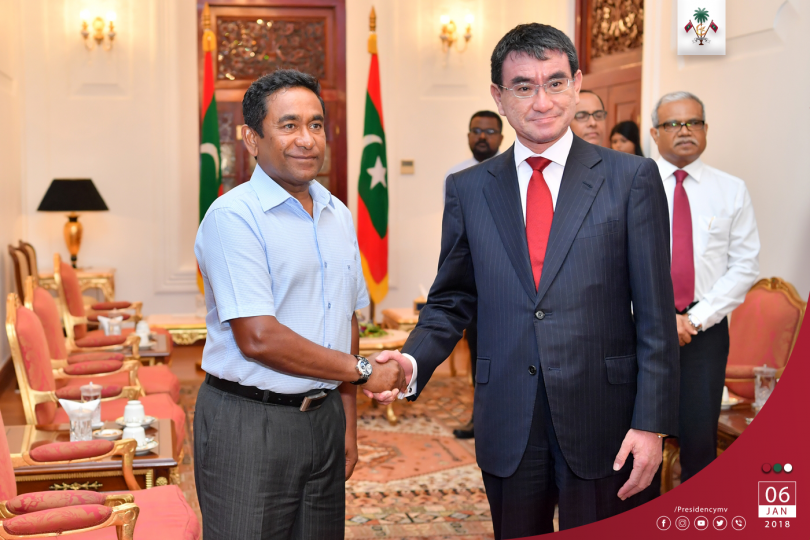 The Minister for Foreign Affairs of Japan, H.E. Taro Kono, paid a courtesy call on President Abdulla Yameen Abdul Gayoom, this evening, at Mulee’aage, the Official Residence of the President.

During the call, the President welcomed the Minister to the Maldives and extended warm greetings and good wishes to Prime Minister Shinzo Abe.

The President emphasised with appreciation that Japan has been a pioneering development partner of the Maldives, and that the Official Development Assistance (ODA) Programme administered by Japan has contributed immensely to the socioeconomic development of the Maldives. In particular, the President highlighted the short-term training opportunities and the exchange programmes for human resource development offered by Japan International Cooperation Agency (JICA) and the ISDBT project for disaster prevention and E-learning. In regard to the ISDBT project, the Minister noted that the system will bring new opportunities to the Maldives for progress in today’s globalized world.

The talks then focused on identifying potential areas of mutually beneficial investment opportunities for Japanese businesses in the Maldives. Moreover, Japan currently being the third largest source market for tourists in Asia, both sides expressed hope to enhance and maintain tourism cooperation.

The President further requested Japan’s support for Maldives’ inaugural candidacy to the United Nations Security Council as a non-permanent member, for the term 2019-2020.

Speaking of environmental challenges, the President noted that climate change remains a critical issue to the Maldives. He expressed appreciation for Japan’s proactive role in tackling climate change globally and conveyed assurances that the Maldives will continue to work closely with Japan to gradually shift towards renewable and alternative sources of energy. The Minister mentioned that Japan is willing to continue offering expertise on the latest technology to assist the Maldives on this issue.

The Minister thanked the President for the support extended from the Maldives for Japan’s initiative to promote security and maritime safety. In this connection, the Minister noted that the Olympic Games is to be held in Tokyo in 2020 and therefore it is imperative that a solid counter-terrorism mechanism be established in Asia through joint efforts to ensure maximum safety and security for the Tokyo Olympic Games. The Minister also expressed interest to provide promotional sports assistance ahead of the Games and organize cultural exchange programmes between Japan and the Maldives.

The Minister further requested the Maldives’ support for Osaka’s bid to hold the World Expo 2025, to which the President agreed to give due consideration.

The call ended with both sides reaffirming their commitment to continue working together both bilaterally as well as in regional and international matters of common interest to enhance the existing ties of friendship and cooperation between the Maldives and Japan.

The Minister was accompanied by the Executive Assistant to the Minister of Foreign Affairs, Mr. Jun Nanazawa, the Ambassador of Japan to the Republic of Maldives, H.E. Kazumi Endo, the Director-General of the Southeast and South Asian Affairs Department, Mr. Shigeki Takizaki and the Deputy Press Secretary/Deputy Director-General for Press and Public Diplomacy, Mr. Toshihide Ando.